A Hairball Is Not a Toy!

I’ve noticed that my human tends to overreact about some things. Like recently, when I found a new toy. She sees me playing with it, walks over to see what it is and starts screaming at me!

“Yecch — where did that come from!? Let go of that hairball! It’s not a toy!”

The way she was carrying on I knew she was going to take it away from me, so I did the logical thing — I picked it up and ran off with it. But she caught me and got rid of it. Even then, she would not leave me alone about the whole thing. She acted like I should be ashamed for playing with a hairball and even accused me of talking to it! (Sometimes I meow at my toys — is that a crime?) Needless to say, she didn’t take any pictures.

This hairball incident turned out to be a Big Deal. The next thing she wanted to know was where I got it. Since Boodie’s the fluffiest cat she figured she probably had something to do with it, but she decided that any of us could be to blame. Next thing I know she brings home something called Petromalt — hairball remedy. All us cats were forced to eat it. I didn’t like it — I thought it tasted nasty. 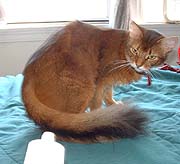 Boodie didn’t like it either, so my human smeared it on her face, which gave her no choice but to lick it off. I think that’s being pretty hardcore. 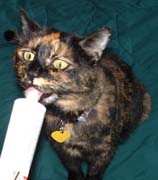 My human also decided that I needed something to keep me “out of trouble,” as she put it, so she pulled out one of the old toys — this plastic stick with a long fabric string on it. I have to admit that it’s more fun than a hairball. 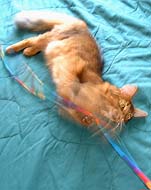 I’ve been getting lessons from Boodie on how to be lazy.

My human doesn’t approve. She thinks Boodie should be more active, like she is — she’s an exercise nut. Recently, she went to a fitness convention and among the things she brought back were a yoga mat and a new exercise DVD. Boodie thought this was great — she kicked back on the mat and watched the DVD. 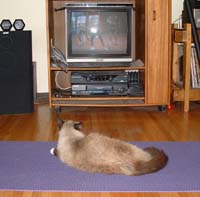 My human tried to get her moving by tossing a “cat fitness ball” at her. That got her interested for about 30 seconds.

Oh yeah, did I mention that my human had a birthday this month? She always buys herself a present. This time it was a red, three-foot long plush iguana.

I hate it. I may have to stop hanging out on the bed now.

Luckily, the dog bed downstairs is a nice place to relax. I knew that dog was good for something.

Now excuse me while I take a bath.