Well, that Christmas tree didn’t last very long again — shortly after the New Year my human took it down and put it back in the box. This is the second year this has happened. 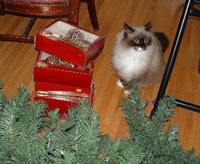 I don’t get it — after all that trouble getting it up, why take it down again?

The tree skirt was covered in cat fur. Not my fault. I swear.

The fun part about taking the tree down was that I found a giant size twist tie. That kept me entertained for at least 10 minutes or so. 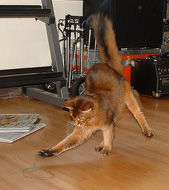 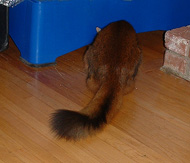 Have I ever mentioned about what an utter cheapskate my human is? I’ve got proof: she came home with holiday treats after the holidays were over and they were on sale. 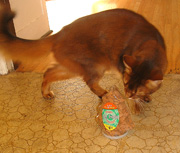 Binga didn’t care — she was more than willing to beg for them. Even Boodie thought she was nuts.

I wasn’t having any! I guess my human felt guilty because a couple of weeks later she came home with new, fresh treats. I sat up for those.

I decided it was time to make my human spend some more money on me so I destroyed my designer cat collar.

The ploy didn’t work. She just pulled out the old dirty collar and put it back on me. This really proves she is a cheapskate — what human in her right mind would save an old cat collar? 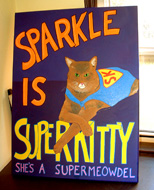 And she’s getting even nuttier. Instead of doing something logical like buying me a new collar or getting another cat tree (hint, hint), she commissioned a painting of me from some guy named R. Hutcheson. She thinks he’s some sort of up-and-coming hotshot artist.

I wondered why he neglected to paint a pose that included my fluffy tail.

I tried to rectify the situation, but it didn’t work very well. 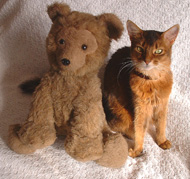 After going from a tightwad to a spendthrift overnight, my human decided she’d better do something to rustle up some more money. This was just fine by me until I discovered she expected me to help. A friend of hers moved away to New York and left her with a big box of teddy bears, and she decided to sell them on eBay.

I had to pose with them.

It was no fun. She reminded me — frequently — that the bears were not playthings. At least not for me.

She’s gotten rid of a few of the bears so far, but she’s hardly made a dent in the box. I will be very glad when they are all gone!