Humans really baffle me sometimes. Three weeks after going through all that trouble putting up the Christmas tree, what does my human do? She dismantles it completely and puts it away. Boodie was really bummed. She was just beginning to enjoy it. 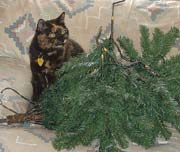 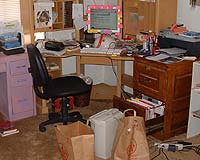 Then, as if that wasn’t enough, my human decided to completely dismantle and rearrange her office! Since she has no organizational skills whatsoever — at least as far as I can see — she had to hire some other human to help her. This woman’s name was Elizabeth, and since she was a cat person, we all ended up liking her quite a bit.

It took us a while to warm up to her, however, after what she began doing to the office. She completely took over and started putting stuff in boxes. I was stunned!

Boodie liked it — it freed up a lot of floor space so she could roll around. 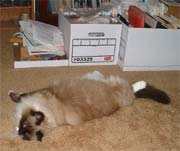 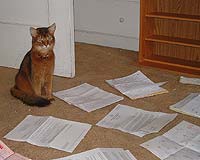 Then, after everything got put in the boxes, she began pulling the papers back out again and putting them in piles. The whole process was mystifying.

I decided to watch the whole procedure from a safe place. 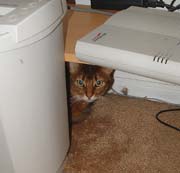 There was some fun to be had. All the books have been put downstairs temporarily, which means the big bookcase with the glass doors is empty. I like sitting inside the shelves. It makes me feel like I’m on display.

And I can mess with Binga and she can’t do a thing about it.

This whole office organizing process took days, which only proves how big of a slob my human is. But after the office was done, she was really happy with the results.

I wasn’t too sure about the whole thing at first.

But then I realized there were lots of new places for me to hang out.

And now I can get to the windowsill for some fresh air and to check out the birds.

So I gave it my stamp of approval after all. 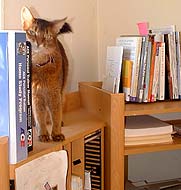 Even though Christmas had come and gone weeks before, my human and her boyfriend had a few overdue holiday commitments. One was with his brother and his brother’s wife. They have 3 cats who I have never met, but I know they are very nice because they gave us a gift!

It was a Double Wide Cat Scratcher! The best part about that is that I got to use it before Binga did. 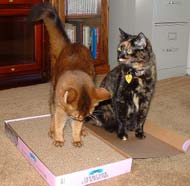 Of course, she eventually took it over and wouldn’t let Boodie touch it.

One thing I want to mention — I really love doing the book reviews for this site! Some of these books are really tasty. Maybe I should start a dining guide to go with the reviews. 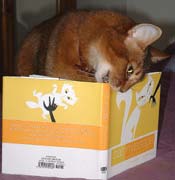