It’s not nearly asÂ cool as a real cat tree, of course, but it’ll do for now. Frankly I’m beginning to think my human’sÂ kind of cheapâ€”she has yet to bring home any cat item that costs more than fifteen dollars. ButÂ whenever I try to complain about this, she points out that as a purebred Somali cat, it wasn’t exactlyÂ cheap to bring me home in the first place.

The Alpine Scratcher is supposed to belong to all of us. Binga, naturally, has tried to commandeerÂ it. The corrugated scratching surface has catnip scent on it, which makes her even more cranky andÂ possessive than usual. Binga makes a poor drunk. 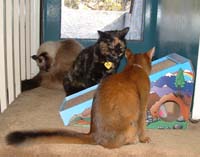 I find the catnip interesting, but not particularly special (I’m told grown-up cats like it betterÂ than kittens). What’s far more exciting to me is the cutout in the side with the dangling toy. That’sÂ really fun. 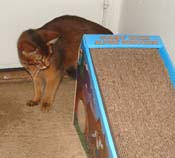 As usual, Boodie only gets to play with the Scratcher after Binga and I are done. 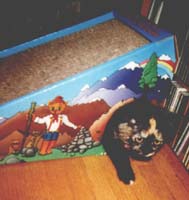 This is the second Alpine Scratcher my human has bought. The first one came and went before I wasÂ aroundâ€”she had it when Binga was a kitten. Believe it or not, Binga was small enough to crawl in the hole!

Apparently the first one got trashed by a neighborhood cat who had a real catnip jones. He usedÂ to come over, drool all over it and eventually it fell apart. That was at my human’s old house.

Although Binga and I are getting friendlier, I still haven’t warmed up to my human’s boyfriend. YouÂ really can’t blame me, thoughâ€”for one thing he smells like that big, loud Sushi dog. For anotherÂ thing, he works at a vet clinic. A couple times already, he’s stuffed me in that horrible cat carrierÂ and taken me there. The latest time he took me, I got spayed and that was really no fun. Then, the dayÂ after I came home my human turned me every which way, trying to get a picture of my shaved stomach.Â That was rather annoying.

She made up for it, though, by letting me play with the feather duster.

I thought about the spaying thing for a couple of days and decided that if I’m old enough to beÂ spayed, I’m old enough for adult cat food. Besides, the Nutro Gourmet chunks taste way better thanÂ the plain old Nutro Max Kitten. You can even tell just by looking. 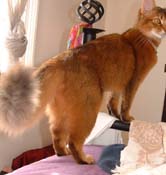 Judging from the way Binga behaves, being a grown-up cat involves a certain amount of troubleÂ making. Misbehaving and acts of minor vandalism are rewarded by lots of attention. So I’m working onÂ that. My first real attempt was to knock over the Alpine Scratcher.

Binga explained that I was doing it all wrong, thoughâ€””You do it to the humans’ things, not yourÂ own toys!” Live and learn, I guess. 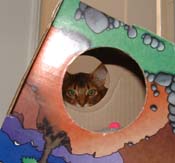