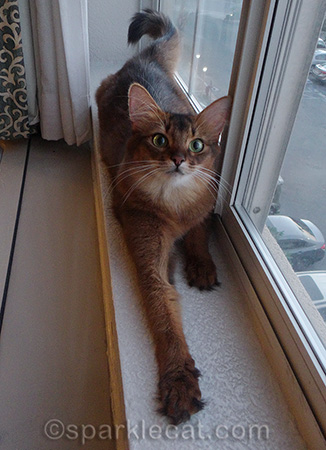 Until this weekend, my human didn’t even remember it was a whole year ago that I came to live with her! In fact, she brought me home from the very same annual cat show in 2014 that I was just at this year. I think she almost forgot because she does not acknowledge sad anniversaries and it was also a little over a year ago that Sparkle died. She actually does not even remember the exact day that the cat before Sparkle died — she just remembers it was sometime in February. 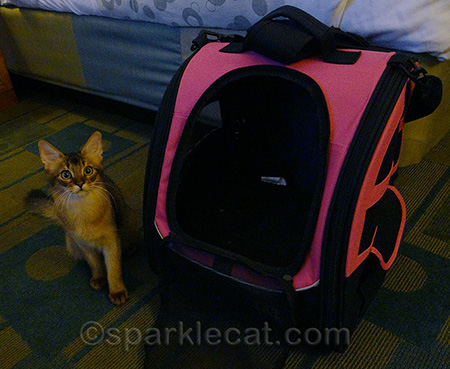 But anyhow, she brought me home a year ago yesterday, and my first blog post here was three days later. So much has happened in the past year! It is kind of amazing. Let’s look at all of it. 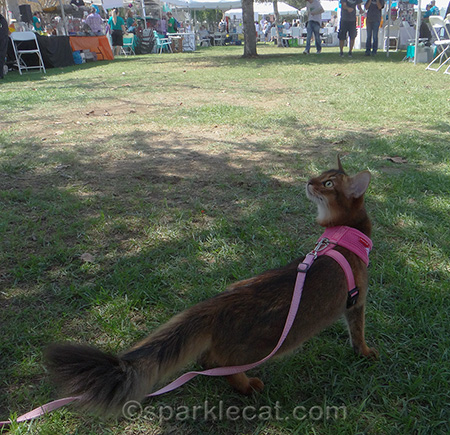 I’d only been here a month when I got to go to my first big event: the L.A. Feline Film Festival! I only stayed a little while that day, but I bet next time they have it, I will be able to stay all day. 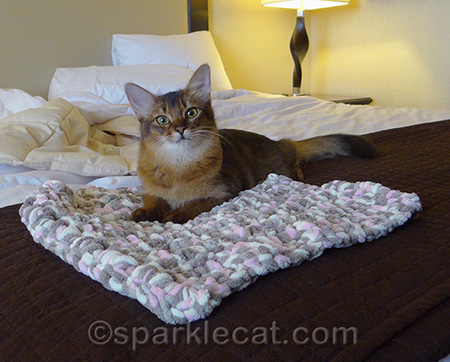 A couple of weeks later, I went to a cat show in Las Vegas and met the Katnip Lounge human, who gave me this awesome blanket! Boodie usually commandeers it now. I also met the Housecat Confidental human at the actual cat show. 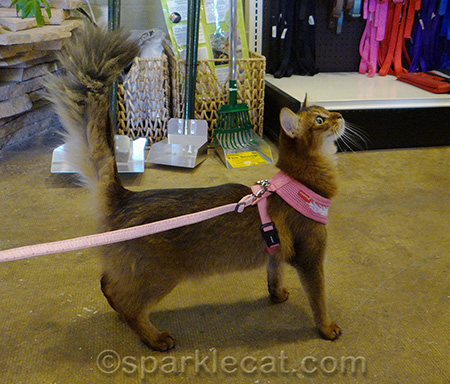 I started accompanying my human regularly to the pet store. Now she almost always takes me along, unless she is in a big hurry. 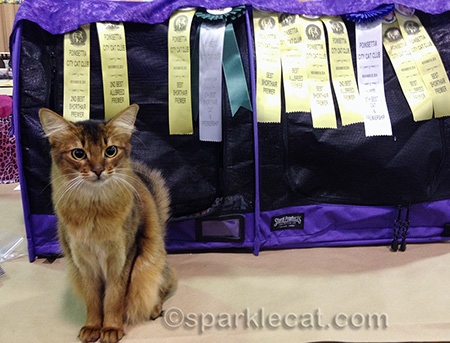 I’ve been in way too many cat shows in the past year to mention them all, but my first CFA show as an adult was pretty big — look at all the ribbons I won! Normally a cat does not get the rosette ribbons at the beginning, but I did manage to grab a couple! That means I beat out a couple of Grand Premier cats! 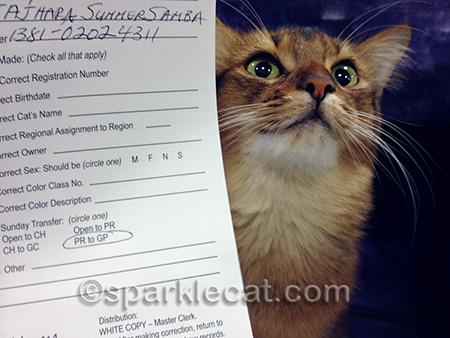 And I became a Grand Premier in January at the San Diego cat show, in my very first ring on the first day! 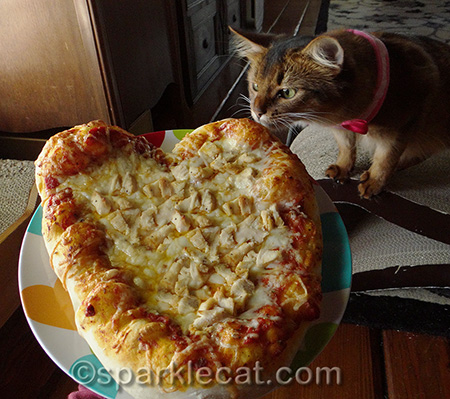 In February, I threw my first big blog party, for Valentine’s Day. 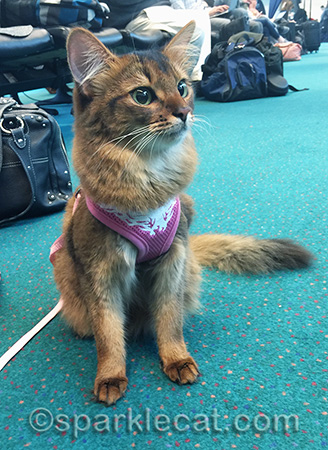 And then I traveled by plane for the first time, to a cat show in Portland! That was an amazing experience. I met the human from the Colehaus Cats, the human from Beaded Tail, the human from Cory’s blog and the human from PDX Pride — plus a fellow author friend of my human’s. Plus I did well at the cat show. 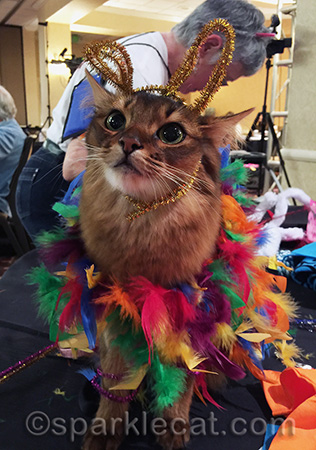 I did so well flying to Portland that my human brought me to the BlogPaws conference in Nashville a couple of months later! I had so much fun! And I won a $100 gift card from Only Natural Pet for my costume in the Pawject Runway competition (I donated it to Kitty Bungalow). 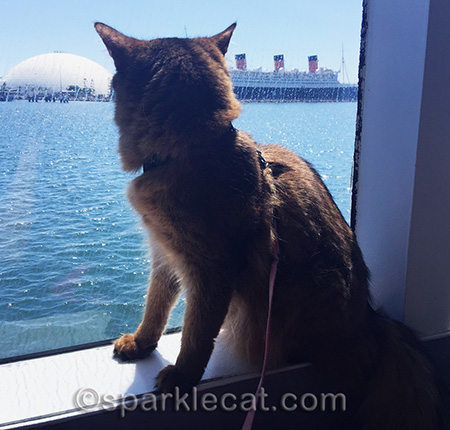 I even got to take a boat to Catalina with my human and her boyfriend for her birthday. 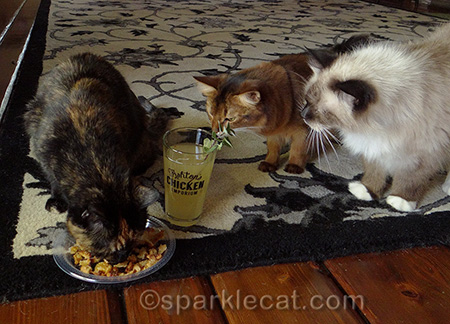 Of course, I celebrated Cat World Domination Day, the holiday that Sparkle founded. I asked Ashton from the Sometimes Cats Herd You blog to cater it, and she did an amazing job. 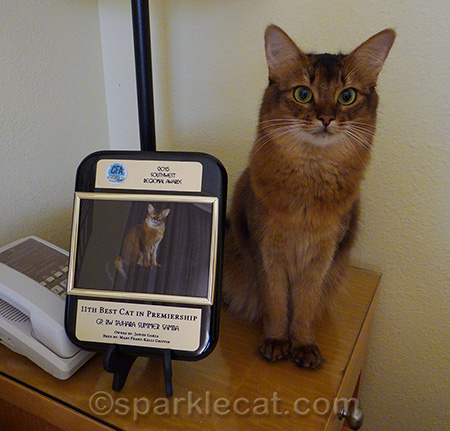 All my hard work at the cat shows paid off with Regional Wins. I got one in CFA. 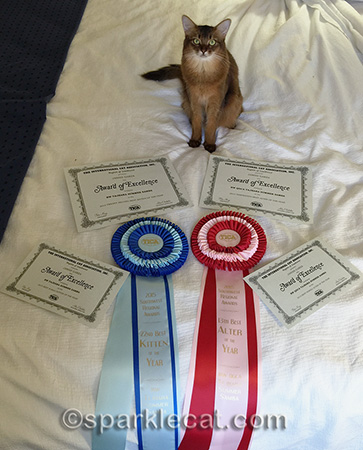 And I got two in TICA — one for Kitten, and one as an Alter!

It has been quite a year, and I am so happy I got to share all of it with you!