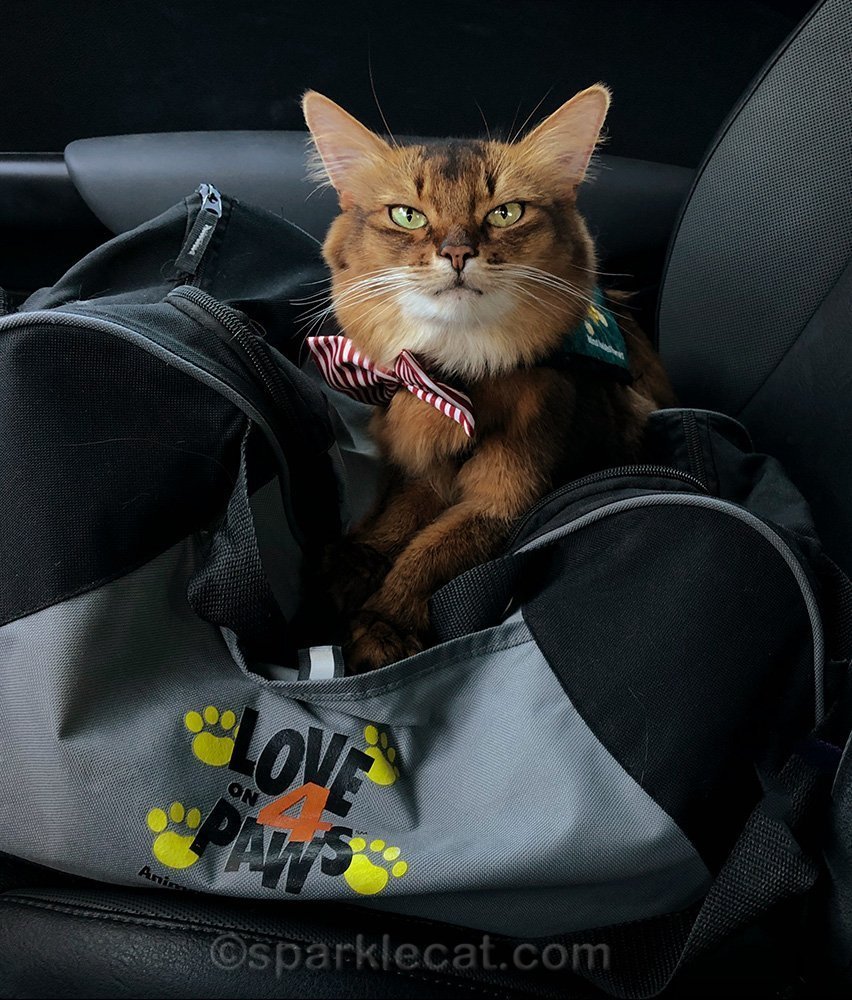 Pet Partners, the oldest organization that regsiters therapy animals, has designated April 30 as National Therapy Animal Day. It’s a day to honor and acknowledge us therapy pets for all the hard work we do… and our human handlers too.

My human believes that everyone should do some sort of community volunteer work, and this is how she is of service. She says she is lucky that my temperament and intelligence have made it possible to be part of a therapy animal program. But I also think I am lucky to have her, because not every human is able to be a therapy animal handler. Some people don’t have the time for this sort of volunteer work; others hate going into hospitals. Some people don’t have the kind of temperament or patience to train a pet for therapy work. And I think they are missing out because helping people who aren’t feeling well, or who are stressed out is one of the most rewarding experiences a human can have. Not to mention a kitty.

We therapy pets are a special, um, “breed.” Even when we pass the evaluation, nobody knows what’s going to happen when we first start doing visits. But a lot of times, we just know. Nobody taught me to snuggle with bedridden patients and make happy paws. Nobody taught me to be patient with children. I just figured it out on my own. And I hear that’s the way it is for most of us therapy animals. Leash training, being comfortable with baths and nail trimming, getting used to being in public, important commands for dogs, such as “leave it” and “stay” — those are the foundation. But the emotional connection is something an animal has or doesn’t.

I will tell you a couple of things that happened during my Pet Expo weekend that show being a therapy animal goes beyond the visits. The first day, there was a big group of special needs adults who came to the Expo. Some of them were in wheelchairs. My human could tell they were together because they were all wearing the same colored shirt with a logo. I saw these people and I went into what my human calls “therapy cat mode.” One wheelchair-bound guy in particular spent a lot of time petting me. He was heavy handed and clumsy, but I didn’t mind. In fact, I really, really enjoyed visiting with him! I just sensed the people in this group would really like spending time with me… and I was right.

The other thing happened on the last day. Moshow, the cat rapper, was doing his afternoon meet and greet, and one little girl had a tumble while waiting to see him. Even though she wasn’t injured, it hurt and she was crying inconsolably. The people managing the meet and greet had her sit in the area where I was resting between visits. My human saw that the little girl was having a hard time calming down, so I guess you know what she said to the mother.

“Do you think she would feel better if she petted a kitty?”

Of course the mother said yes, and my human unzipped my enclosure and I let the little girl pet me all she wanted. I was really happy to help, and eventually she calmed down. It was probably my favorite part of the weekend — and my human’s too. So you see, even when we therapy animals aren’t on assignment, we are still working! And we are glad to be of service.

It’s an honor and a gift to be a therapy animal. I never take it for granted, and neither does my human.