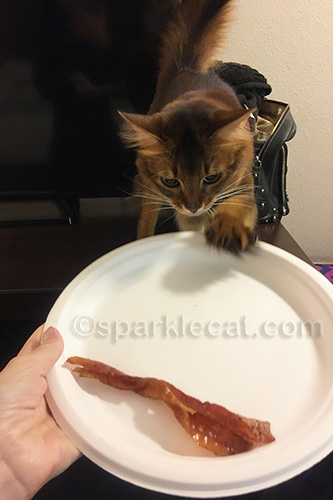 My big cat show weekend started off great — the hotel breakfast buffet had bacon! Lucky me. 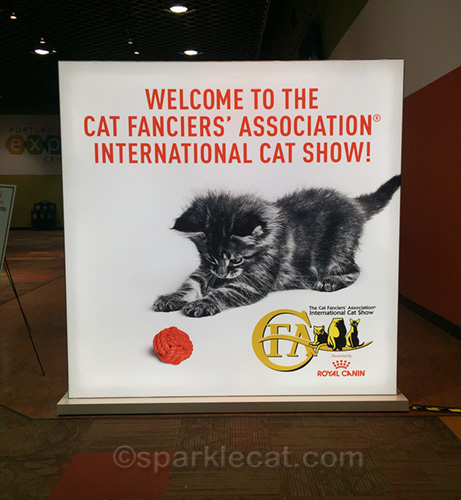 The CFA International Cat Show is a very big deal! CFA holds it once a year in a different city. It almost never comes to the West Coast, so we were lucky to have it in Portland this year. 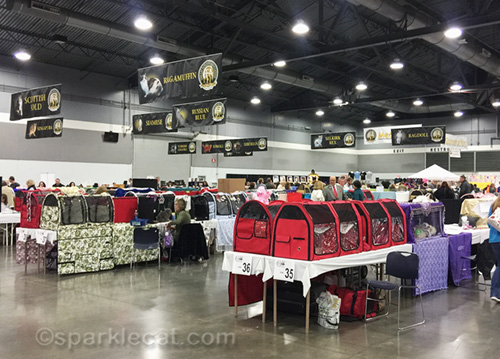 I think there was something like 500 cats entered! The breed areas were divided in half by the judging rings. What you see in this photo above is about a quarter of the cats. 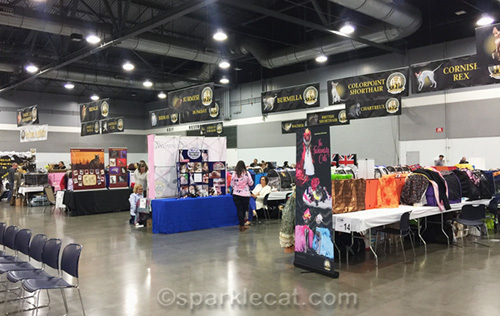 Here is another quarter. The breeds were in alphabetical order, starting from the back with the Abyssinians, and going all the way down to the Turkish Vans, who were across from me. 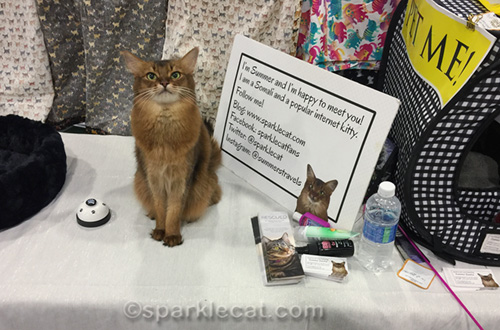 And here is my little spot at the end of the cat show not too far from the entrance! 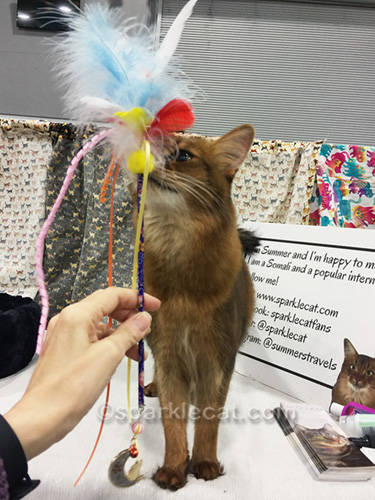 My first visitor was a very nice Asian lady who did not speak a lot of English. She took photos of me and enjoyed hanging out with me… and gave me this super pretty cat wand! That was so totally awesome of her! 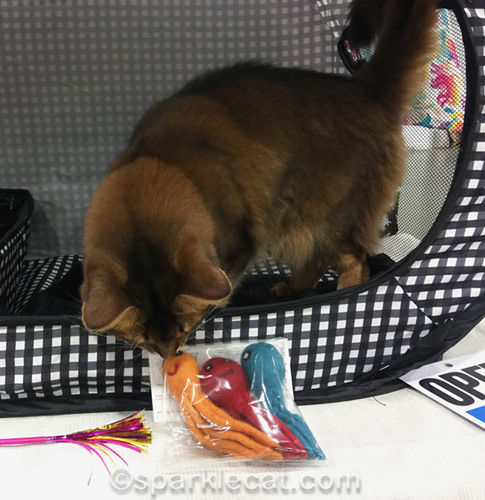 There were loads of vendors, so I did some shopping for my Secret Paws partner. For those of you who don’t know what that is, we blogging cats do a Secret Santa type of gift exchange, and I was sent my partner right before the show. This is one of the things I got for them. I can’t show you the other couple of things I got because they were toys they asked for specifically and I don’t want to give away who they are in case they are reading this! 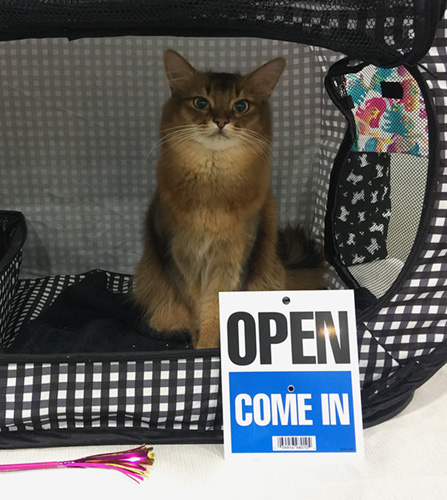 Because the show was so big and neither my breeder nor any of my other southern California pals were there, my human took some precautions. She got locks for my enclosure for when she needed to shop, visit a friend, or go to the restroom. That way nobody could unzip my enclosure to touch me without her being there… or worse yet, try to steal me! Plus she got a sign that said Open on one side, and had a clock on the back that said when I would be back, for when I needed a rest, or was away from my enclosure. 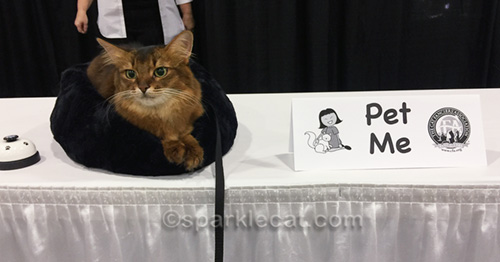 I was away from my enclosure several times over the weekend to hang out at the Pet Me Cat table. My human and I thought it was going to be more official than it actually was. But a couple of times on Saturday, and once on Sunday, I spent an hour or so at a table near the entrance so spectators who came in could see me and pet me right away! As you see, I also had my bell because I did tricks for them too. I did so many High Fives I was worried my paw was going to fall off! 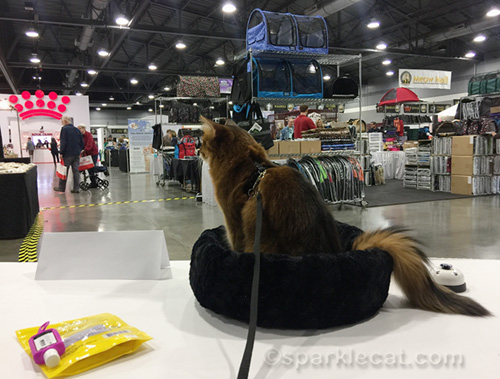 Here is my view from the Pet Me Cat table: it was the Meow Mall! Because the show was so huge, it was full of vendors! People were selling all sorts of things for cats and human things with cats on them, and somebody even had wine they were selling. 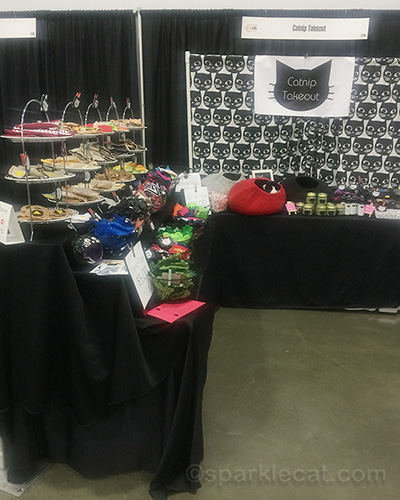 This booth was run by a very nice lady and had some really cool toys! I can’t show you what we got there because, well, Secret Paws and all that. 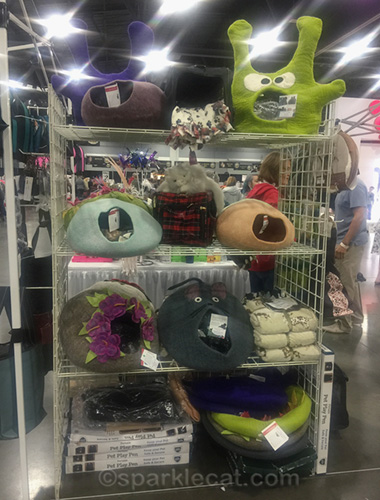 Check out these amazing cat beds! Of course, my human said there was no room to take one home to Los Angeles. 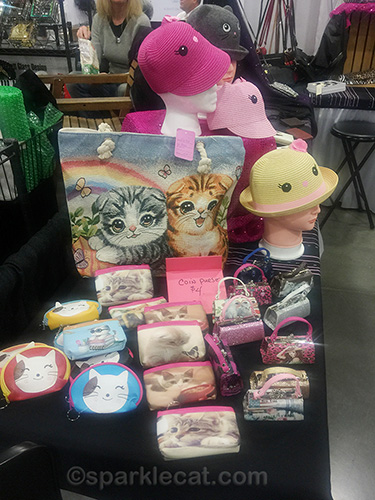 Here are some of the cute cat items for humans that my human found there. There was lots more where these came from! 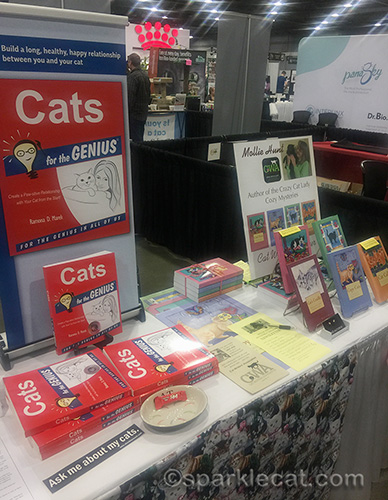 A couple of cat writers, Ramona Marek and Molly Hunt, had a booth too! Ramona has a really informative book called Cats for the Genius, and Molly has a cool cozy mystery series. Check them out! 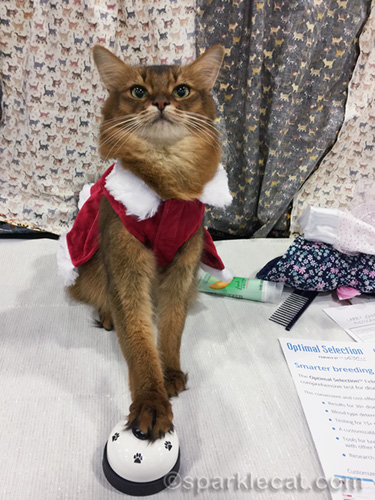 I did have a few outfits to wear, including my brand new Santa jacket! One girl who stopped by showed me a photo of her dog wearing the same jacket. 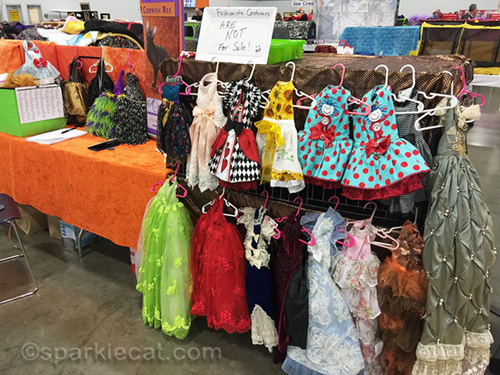 I can’t say I was the best dressed kitty at the show, though… check out the wardrobe for this Cornish Rex! I didn’t know my East Coast pal Coco the Couture Cat had competition — but she does! My human never did get to meet this particular kitty because she was so busy with me, but we saw her off in the distance at one point, in her finery. 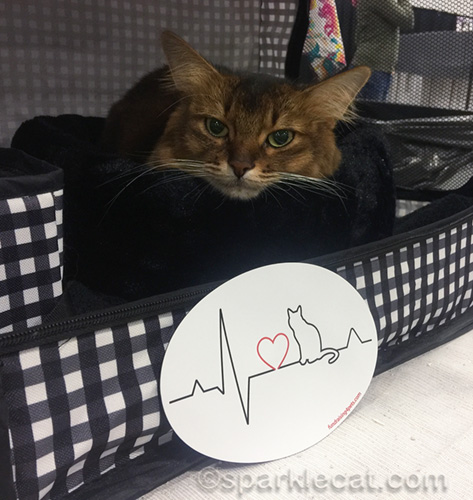 A couple of pals stopped by on Sunday. Angel and Isabella’s humans came by early and visited with me for a while! And later on, Basil the Therapy Cat’s human stopped by too. Basil’s human found this amazing car magnet that’s perfect for therapy cats, so she got one for herself — and for me and my human too! That was so nice of her. 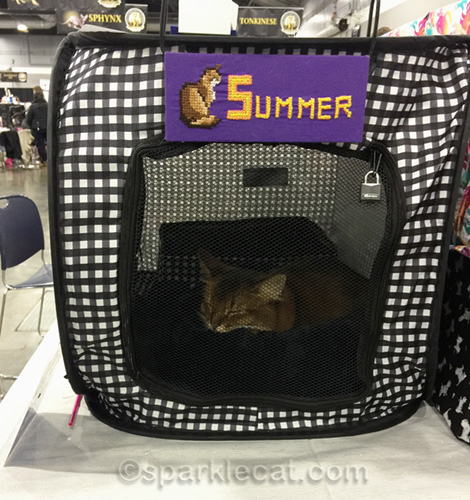 I took breaks during the show and my human tried to pace me, but it was still exhausting! Greeting the public and being on for so long really takes a lot of energy. I’m going to get lots of rest when I get home.