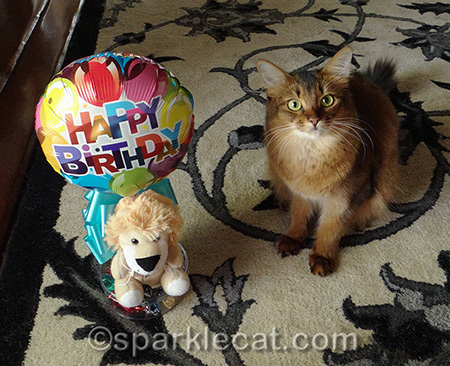 Can you believe I’m one year old already? Where does the time fly? Between cat shows and my human’s working on Rescued (the Kindle version just came out!), we’ve been too busy for a big birthday bash — but don’t worry, there is still going to be an awesome Cat World Domination Day in June! 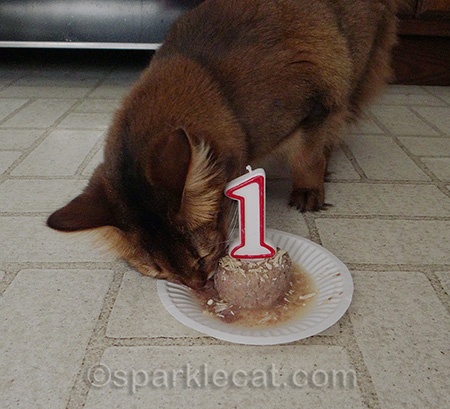 I did have a special birthday meal — my favorite chicken cat food sprinkled with freeze dried chicken (eat your heart out, Ashton!). It was awesome! 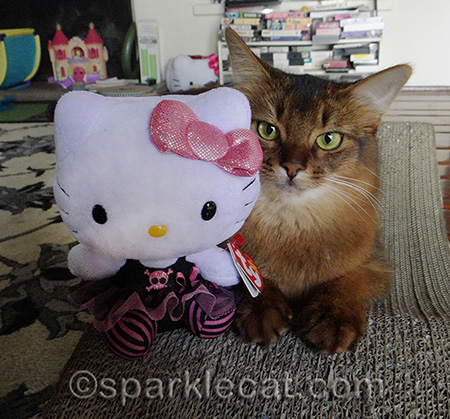 She also got me this Hello Kitty Beanie… at least that’s what she said. Do you think she got it for me or for herself? Your guess is probably the same as mine! But it doesn’t matter because I didn’t want any presents for my birthday, really. I already have a house full of toys, playmates and more cat show ribbons than I could ever chew through!

I did ask for one thing, however — for my human to hold a birthday commenthon to benefit Southern California Abyssinian (and Somali) Rescue. Just because Abys and Somalis come from a breeder, sometimes we wind up in trouble — and even in kill shelters! The worst nightmare a breeder has, in fact, is that a kitten she lovingly raised winds up being cruelly treated or dumped… and even though nearly all responsible breeders have a clause requesting the kitten or cat’s return if things don’t work out, sometimes people ignore this and just get rid of a cat that has been an “inconvenience.” S.C.A.R. helps Abys, Aby mixes, and Somalis in need and gets homes for them — and they could always use donations. So my human will be donating 50 cents per comment, up to $50. Please make my birthday wish come true, for my commenthon to hit its goal!

P.S. If you want to see Sparkle’s first birthday, it’s at this blog post.