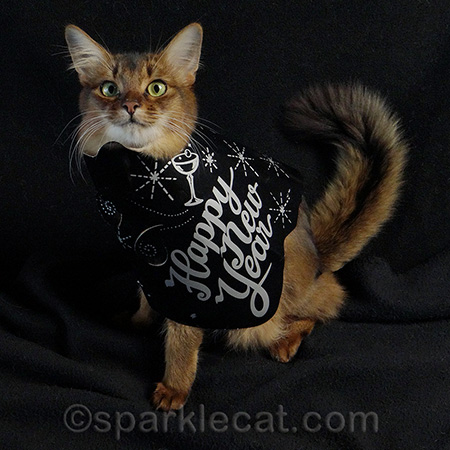 It’s a good thing New Year’s Eve comes just once every 12 months — I don’t want to have to wear this thing again anytime soon! I’m glad I talked my human into doing a post that looks back at the year, because in a lot of ways, 2014 made her very unhappy. But after looking through a year’s worth of posts from Sparkle and me, she realized that maybe it wasn’t so bad after all… and there was a lot of good! So let’s look back, one more time… 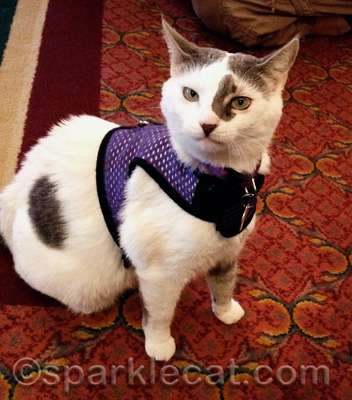 Our first stop makes my human both happy and sad. In January, she went to the San Diego Cat Show to share a booth with a couple of other humans from the Cat Writers Association, and Zeki the Cool Cat. Sparkle told her story here. It was a fun weekend, and my human sold quite a few of Sparkle’s books and cards. But it makes her sad because Zeki is no longer with us. She became sick and died right around the same time Sparkle did. Zeki was a big loss for me because I would have really liked to have met her one day. 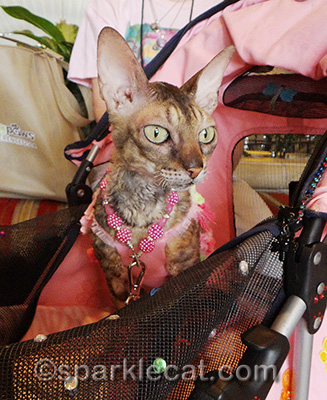 Later on, in May, my human went to BlogPaws at Lake Las Vegas and hung out with many popular kitties, including the Katnip Lounge kitties and Coco the Couture Cat! I’m hoping that maybe I will get the opportunity to meet Coco at some point! She is one of my idols. 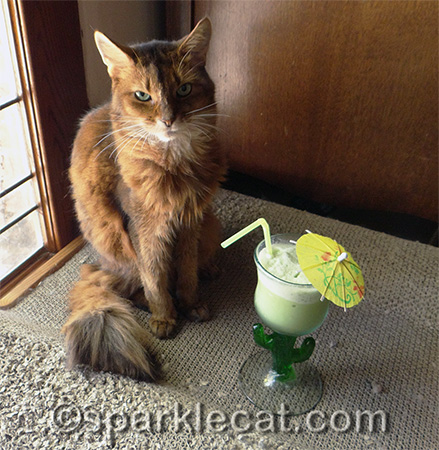 In June, Sparkle celebrated Cat World Domination Day, and her birthday. Nobody had any idea it was going to be her last. And she did not tell anybody, but she actually had to go to the vet on her birthday. She was not well, and you can kind of see it in some of the photos, even if my human didn’t at the time. I do want you to know that even though Sparkle is gone, we will still have Cat World Domination Day on June 24 every year. My birthday is March 19, so that will be a different party. 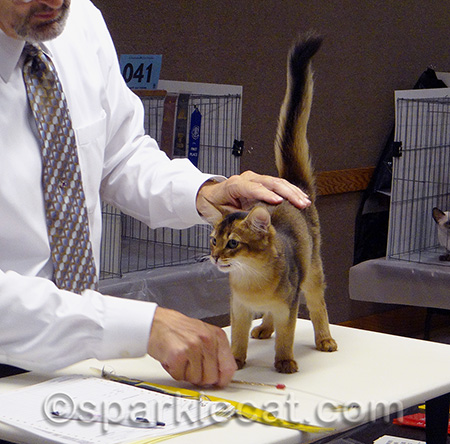 The first time you saw me was in late July, but my human had no idea she was bringing me home! She was visiting with my breeder at a cat show, which happened to be my first one. She thought I was adorable, but at the time my breeder thought she was going to keep me. While my human was at the cat show, she bought Sparkle an awesome cat bed. Boodie uses it the most now. 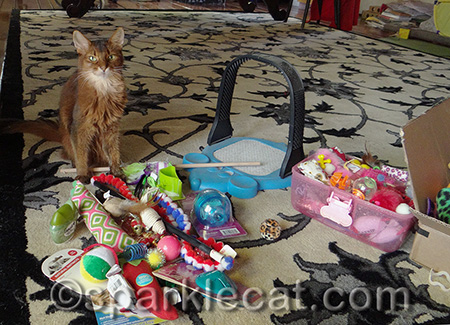 In early August, Sparkle helped my human pick out a bunch of her own cat toys to give to the kitties at the Cat House on the Kings. Maybe she realized she would not be needing them for much longer. In any case, it was an amazing visit and my human left several bags of toys for the kitties there. 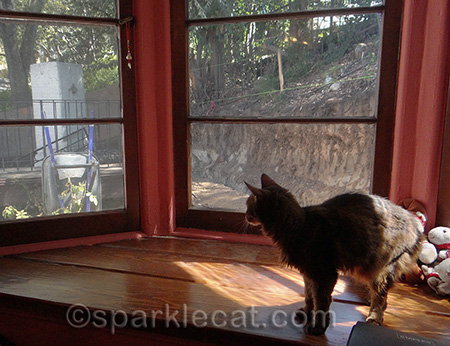 Unfortunately, one of Sparkle’s last memories of her home was the retaining wall being torn down (the new wall being built was one of my first). Because of that humongous wall, and the furnace dying a few months later, the humans didn’t have Christmas this year. 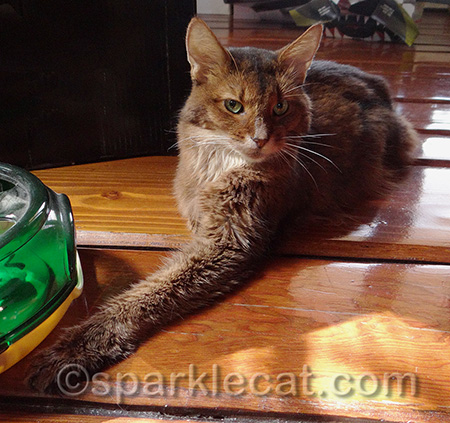 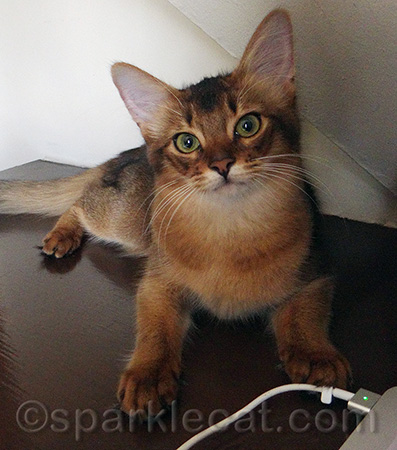 I had my first official blog post a week later. I still can’t believe how young and inexperienced I was! And I had so much responsibility — the first thing I had to do was organize Sparkle’s memorial. 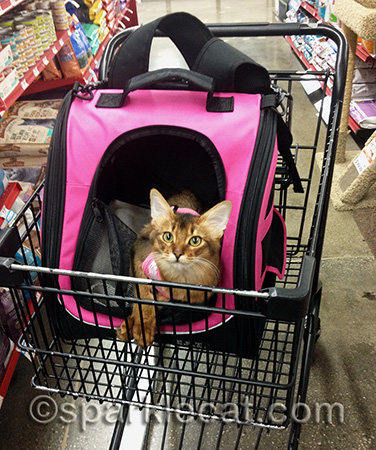 I was off doing things right away! My first trip (other than getting spayed) was to Petco. 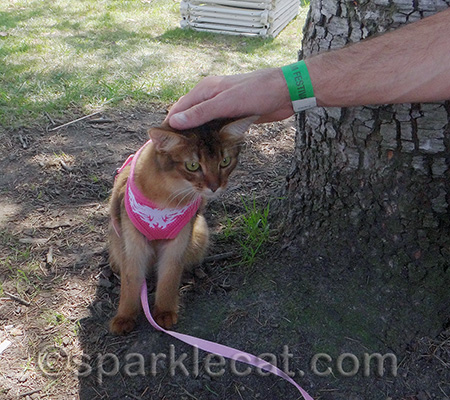 A couple of weeks later, I went to the L.A. Feline Film Festival! 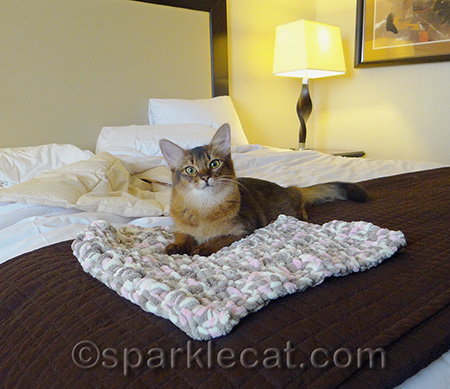 I even went to Las Vegas to compete in a cat show! Hotel rooms are awesome. 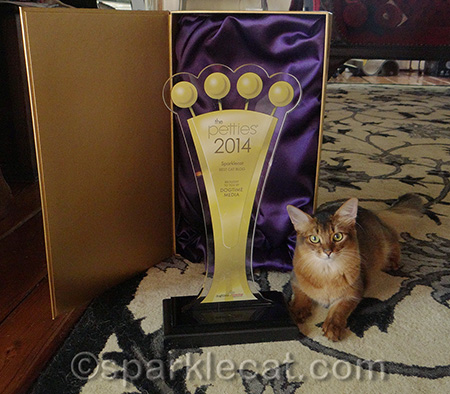 But along with all the fun, there have been a lot of big responsibilities. Sparkle won Best Cat Blog in the Petties, and I had to accept the award on her behalf. 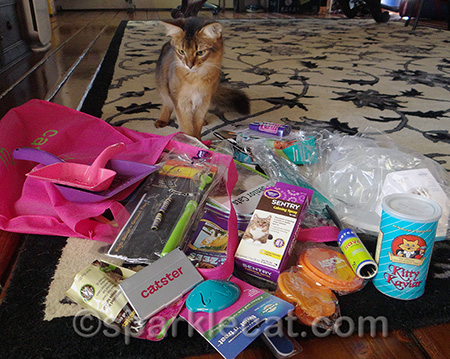 My human decided that MeowWorld was too far for my first plane trip, so she went without me. But she had lots of fun, Sparkle won a Muse Medallion for the blog, and I got a bunch of awesome swag for a giveaway. 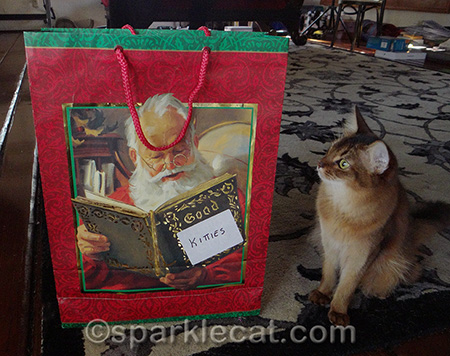 Even with all the cat shows and fun giveaways, I have to say my favorite thing I have done so far was organize the Santa Kitty Toy Hop and host the linky! It was so amazing to see cat bloggers all over the world help out kitties at their local shelters for the holidays.