You are here: Home / Diary / Going to the Dogs 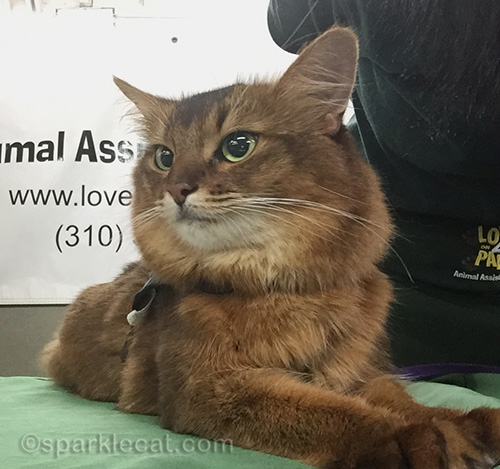 Being a therapy cat is not all about visiting patients and giving out doses of purr therapy. Sometimes I also have to be a spokescat for the organization. That’s what I did this weekend. A doggy day care and boarding place called Camp Run-A-Mutt had an event — the Dog Day Afternoon Fundraiser for The Dexter Foundation Dog Rescue.

My organization had a table to spread the word about therapy pets and to hand out literature. Camp Run-A-Mutt said it was okay if one of the therapy cats came, so I got a special request. My human was reluctant at first. It didn’t have anything to do with the dogs — she knew I would be okay with them. It was the drive! She tries to keep them under half an hour each way, to make sure my total travel time is shorter than my visit time. So she pulled out her GPS and figured it out and it was just about our maximum time, so she accepted for us. She knew I would enjoy doing this. 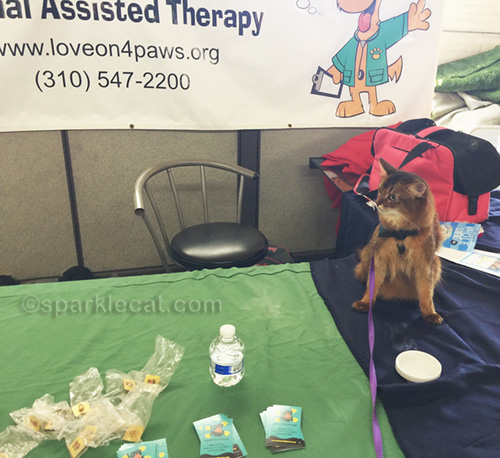 We were the first team there, so we set up. I had to sit in the carrier while my human did that because she is overprotective. She wanted to be able to keep an eye on me the whole time I was out. She was worried there would be too many barking dogs, or that they’d come right up to the table and be aggressive with me. Of course, nothing could have been farther from the truth. All the dogs there were very well behaved, and so were their humans. I got a lot of attention and got lots of pets… and treats too! I even High Fived a few people. A lot of people remarked about how “chill” I was. Not sure why that was such a big deal… I’ve been to two BlogPaws conferences, and they were bigger and had more dogs. 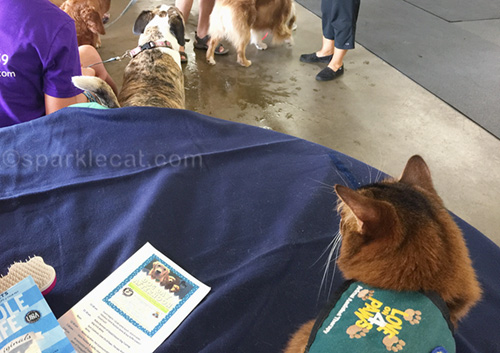 There were a couple of dogs at the table next to ours and at one point, one of them was wagging his tail like a cat toy! I really wanted to go check it out, but my human said no. 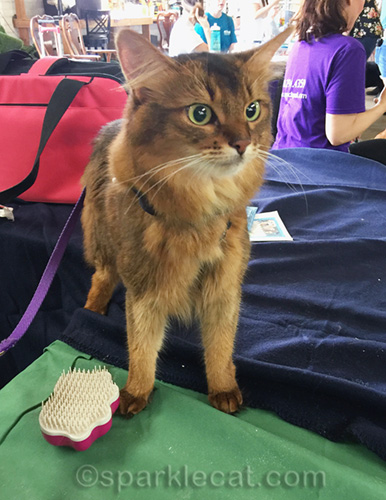 My human also brought a little cat brush along to give her something to do when she wasn’t talking about our therapy organization, and also to keep me looking nice. It was really hot and humid where the event was, though, and while I wasn’t shedding much, every strand of fur stuck to her! She even got some in her mouth! Now she knows how kitties feel. The two of us had to get up and do a short talk about the organization we belong to, what we do, and why it’s so gratifying. My human told the MC to poke her if she saw her trying to rub fur off her face. 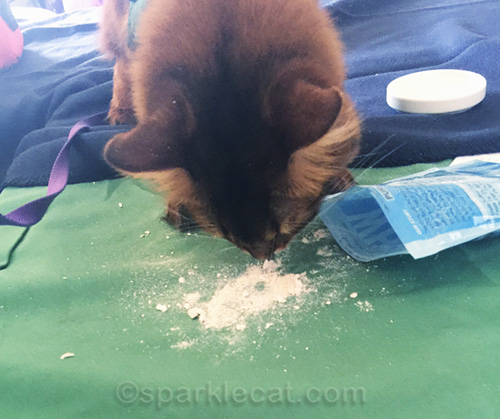 Have I mentioned before how clumsy my human is? She brought a bag of some of my favorite treats — and spilled them on the table! She cleaned it up as much as she could, but I still got to lick up some of the treat dust. 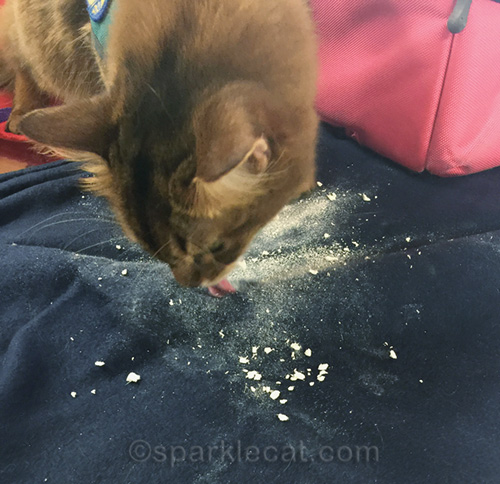 Oh, and she did it a second time! This time she spilled the treats on the fleece blanket she brought for me. That had to go in the laundry when we got home. 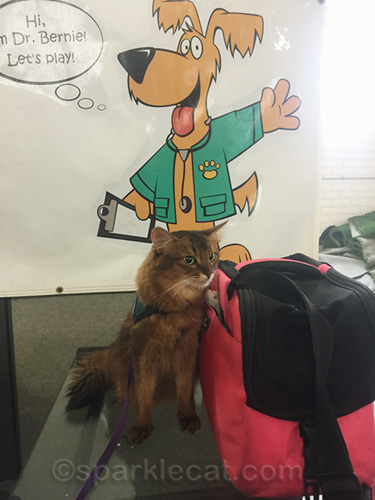 The other team showed up for the second shift (it was Mr. Scruffles and his humans), and my human packed me up to go home. They said we could stay, since I was doing so well there, but my human was dying from the stuffiness of the hall, and she had already made plans. I totally would have liked to stay, though!