Not Feeling the Love

The battle for the cat bed (that I’m not participating in) is still raging. 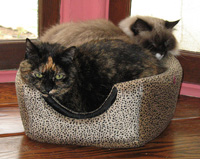 Now this fight to claim new office space is spreading out onto the desk. Binga thinks she should be allowed to hang out in one of the bottom drawers. 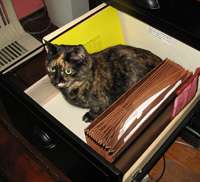 Meanwhile, my human has graciously offered to feed me in one of the middle drawers while she is working. 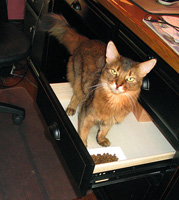 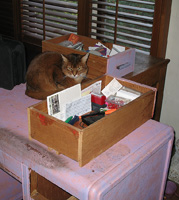 She told me not to get too comfortable with this routine because she will eventually be filling up this drawer, and the rest of them, with stuff. But I think this set-up will last for a while. I mean, the old desk is still sitting at the far end of the living room weeks and weeks after it was ejected from the office. And those drawers haven’t been emptied yet.

My human apparently has better things to do than organize her office. Like the whole dumb Valentine’s Day thing that happens this time every year. She went out and bought her boyfriend ridiculous pieces of junk that she deemed festive. And they were supposed to be from us cats and the dog. Notice how none of us actually wanted to pose with these things.

She also found a card that was supposed to be from Binga. She even made her sign it. 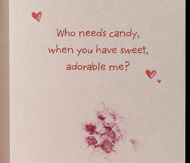 Binga gets away with murder around here. Then she puts on that cute and innocent act that fools no one.

I really dislike Valentine’s Day, as you can tell. There is nothing in it for us cats. My human’s boyfriend came home with a box of dark chocolate squares, and my human woke me up and forced me to pose with it. 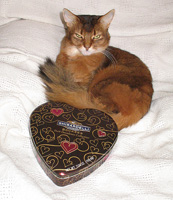 Then she tried to make things better by offering me a Valentine’s Day-themed cat toy. 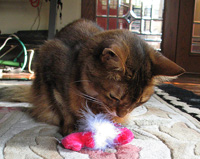 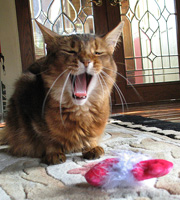 Even Binga didn’t want to pose with it, much less play with it. 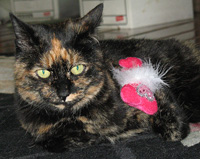 But something kind of cool happened. We got this plastic box, and I didn’t know what to make of it at first. Then I realized that it was a kitty toy chest. So my human now has a place to put our toys so they won’t get lost. 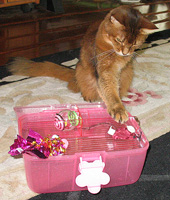 I hope she buries that Valentine’s Day cat toy at the bottom and we never have to see it again. 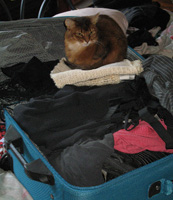 Not long after that, my human left town for a few days. She said it was a “writer’s conference.” I was kind of annoyed that I wasn’t invited — I am the one with the award-winning book, after all. Besides, when I’m left in the care of her boyfriend, he forgets to check up on me during dinner sometimes and lets Binga steal my food. But in spite of all my best efforts to blend in with her clothing, I did not get to stow away to the conference. Darn!