Binga always causes trouble, but lately she’s been worse than usual. The humans are perplexed by her behavior but I can see a method to her madness. For example, she knocked some books off the ugly lavender bookshelf in the living room.

I don’t think it was a random accident, either, because look at one of the books that was practically destroyed in the fall.

And then one afternoon my human came home with dry cleaning and a bunch of shopping bags. She tossed everything on the bed she never bothers making.

Binga wouldn’t keep her face out of one of the shopping bags. 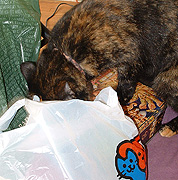 Because Valentine’s Day was coming up, my human wanted me to pose with some items she assumed were “festive.” I wasn’t interested.

My attempts to take a nap were disturbed when she kept placing that dumb box of candy next to me. I finally gave her a good pose so she would leave me alone.

Finally my human pulled out a red satin and lace heart and made Boodie pose with it. She refused to cooperate. 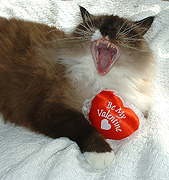 So my human enlisted me once again to model with it. At least it tasted good.

Finally Valentine’s Day rolled around. My human gave her boyfriend the box of candy, which was pretty useless because I get the feeling that she ate most of it. He gave her a big bouquet that contained, among other things, stargazers and a calla lily. My human freaked out when she saw it, and not in a good way, because lilies are deadly poisonous to cats! We generally don’t eat flowers (Binga, in fact, would rather dig in the trash), but my human wasn’t taking any chances. She ripped the lilies out of the bouquet and wrapped the rest of it in red cellophane because she wasn’t sure if the other flowers were poisonous. Then she placed it on top of a shelf where we can’t go.

It wasn’t the most joyous Valentine’s Day around here.

My human decided not to sell any more teddy bears for a while after Valentine’s Day since she figured a lot of people probably got bears for gifts. I thought this was a lucky break and I wouldn’t have to do any eBay

modeling for a while, but I was wrong. She plunked down a Laurel Burch wallet one day when I really had better things to do.

But the worst thing was forcing me to pose with that idiotic Curious George toy. I hated that thing!

Because I was so obviously displeased, she promised to buy me a cat toy with the profits. Well, the thing sold for all of two dollars. What kind of cat toy is she going to get me with that? I should have feigned more grumpiness with the Laurel Burch wallet — that went for more.

And where is that two-dollar toy anyway? I don’t see my human rushing off to the pet store at the moment. Instead she’s been fooling around with a bunch of paperwork and files — something about city business tax or something. We cats tried to help, even though she never appreciates our aid.

And the business tax thing is only the beginning — she’s got more tax stuff to put together for her annual appointment with the human she calls her “tax lady.” Binga can’t wait.