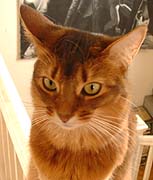 Yes, it’s been quite an annoying month around here. My human and her boyfriend had that Valentine’s thing again — I guess it’s a yearly deal. We cats hate Valentine’s Day because we’re not included in it. My human’s gift to her boyfriend was this stupid plush M&M toy. She let me look at it ahead of time, thinking it would make me feel better, but I really thought it stunk.

And the tag said it’s for ages 3 and up — the only cat here that’s old enough to play with it is Binga. She didn’t like it either.

Then my human’s boyfriend made her dinner. It was salmon. We didn’t get any — what a surprise.

And while this whole Valentine’s thing was going on, my human was also doing her tax thing — I guess this happens yearly, too. I saw that accordion folder come out and I knew we were in for a boring week. No play time and papers all over the bed.

This time the only one who was really interested in the tax preparations was Boodie. She thought the roll of calculator tape tasted good.

Binga put some teeth marks in it too, but I think she was just expressing her irritation.

I thought the calculator tape was a plaything. And if it isn’t, it should be.

The good news is we may not have this tax thing next year — or at least not all those papers. My human kept muttering something about getting this thing called Quicken. She says it will make her life easier. I hope this means she’ll have more time to play with us.

She certainly didn’t play with us much this month. In fact she all but disappeared for three days. She was at something called “The Fit Expo” — she should have taken Boodie along to get some diet tips.

Just when the Fit Expo happened, there was a plumbing disaster. The kitchen sink and the washer backed up into the downstairs bathroom — where my litter box is — and flooded it! There was water in the bathtub and all over the floor. It was nasty.

My human called the plumber and until he came, she took my litterbox and put it in the kitchen… right near our food dishes! Boodie was thoroughly disgusted. 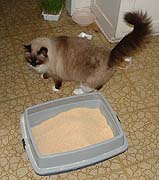 Luckily we were only inconvenienced for a few hours. But now the workers are back — or at least the tall painter guy is. So we have more disruption to look forward to. We all really wish they would leave the house alone already. Cats don’t need a nice house — just more cat trees. 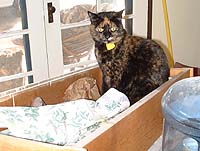