Food and Romance (in that order)

My human and I settled the cat food debate amicably. One day, along with the bland Nutro Max Kitten,Â she returned from the pet store with something different: a new Nutro kitten food.

It’s great! It’s sort of chunky, like the grown-up cat food. This new stuff comes in adult flavorsÂ too, but oddly enough, Binga and Boodie didn’t like it. Boodie’s rejecting it is really unusual, asÂ she’ll eat just about anything (my human even had a hard time keeping her away from that Nutro MaxÂ Kitten).

I was so excited over the new food that my human promised to buy nothing but that for me… just asÂ soon as I finished the old food. The only problem was that there was quite a bit of it left. So I hadÂ to choke the old stuff down for a couple of weeks. But then one day my human showed up with a bigÂ cardboard box of Nirvana. And it costs more than the Nutro Max Kitten, so maybe she isn’t such a bigÂ cheapskate after all. 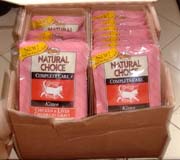 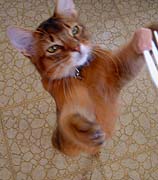 Now I get twice as excited at mealtime as I used to. At least that’s the excuse I use for still notÂ learning how to sit up properly.

One time I got so wound up over my new food that I knocked the dish out of my human’s hands. I hadÂ dinner on the floor that night.

Even though my sitting up skills are lacking, I’m getting way better at the balance beam. Binga’sÂ still the expert, however. I really can’t begrudge her when she shows off her expertiseâ€”in fact, IÂ kind of envy her. It’s going to take a lot of practice to get that good.

Not long after I started getting the good kitten food, the humans had this holiday called Valentine’s Day. From what I can tell, it’s an excuse for humans to get stupid things for each other. My human got her boyfriend “Hotwheels Crispy Chocolaty Tires.” I was less than impressed.

But I was truly horrified by what her boyfriend got her: the ugliest hot pink plush frog I had ever seen! It’s absolutely hideous. Not only that, he admitted he had to walk around the store carrying it.

Binga didn’t like it either. My human tortured her by making her pose with it.

She didn’t have as much luck with me.

After I figured out that the pink frog blew as a play toy, I dug out some old toys from a couple of Christmases ago, before I was even here. I love the Santa which, amazingly enough, is still mostly in one piece.

The red-and-green sparkly ball wasn’t as lucky. First I tore off as much of the green mesh as I possibly could (my human was really annoyed at having to pick up all those little pieces before I ate them). Then somebody stepped on it and now the bell doesn’t work anymore.

“You should like Christmas toys,” said my human. “For a cat, every day is Christmas.” I can’t help it if I love to play! Sometimes I get so riled up I’m beside myself. 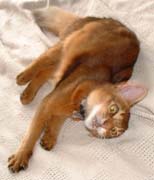 All this playing is exhausting, too. 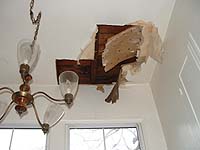 At least I don’t get into as much trouble as Binga. She tries to sneak onto the balcony over the dining room, where she’s not allowed. What’s worse is the balcony leaks and after the last rain, part of the dining room ceiling fell in. When my human heard the crash, at first she thought it was one of us cats making trouble.

Her boyfriend and a pal covered it in time for the next rain. They also temporarily covered the balcony with tar to keep more water out. Binga managed to sneak out there and got tar all over her feet. The emergency pet clinic said not to let her lick her paws until they were cleaned thoroughly. It’s next to impossible to keep Binga from licking anything, so my human and her boyfriend had to put an E-collar on her. Maybe I should have laughed at her misfortune but she looked so frightening with the thing on that I growled at her instead.