You are here: Home / Diary / Every Moment Is a Gift 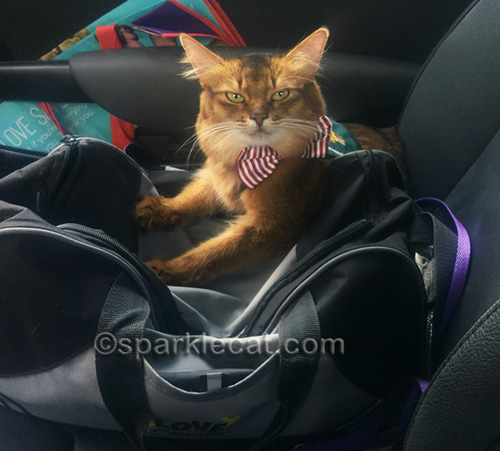 I love offering my purr therapy at hospitals. Sometimes all the noise, machinery and confusion make me a little nervous at first, but the moment I settle down with my first patient, I remember why I’m there. My human says it’s like I go into a zen state.

This visit started off in a very ordinary manner. A couple of patients were allergic and couldn’t see me. One guy wanted to know if I liked football because he was watching a game. I sat in his lap for a while. I saw my friend on the fourth floor with the artificial arm. An older lady getting rehab smiled when she saw me — her face completely lit up. While I snuggled with another older woman, her husband told me about the cat they had for 10 years, who died of kidney disease. He explained how his daughter, who had been in veterinary school (and was also there) tried to save the kitty. Plus I did a couple of high fives to entertain patients who were weren’t bedridden.

I also had an unusual visit — a special request from a family, nurse and patient in a wing of the hospital I don’t usually visit. I think this wing gets therapy pet visits during the week, but it’s not scheduled for Sundays. So at the end of our time at the hospital my human took me over there. The whole family was there with the patient — the man’s parents, and two younger women, probably his wife and his sister. He had been in the hospital for many weeks, and missed his cat at home.

You never know what a patient is going through (on very rare occasions, they will tell you). Mainly, as a therapy animal, you are there to help them forget, and that was my role on this visit. But my human could tell that this man, who was probably in his 30s, had gone through something awful. He was in a wheelchair, and his legs were stick-thin from disuse. He could only move his hands awkwardly and he had a patch covering one eye. It was hard for him to speak, but she could tell he loved to talk, and that when he wasn’t going through whatever trauma or illness he was experiencing, he was witty, fun and enjoyed some of the same pop culture she did. But for now he was weak, frail and had a hard time communicating. It reminded my human about how fragile life is, and how things can change in an instant. It was nice to see his family there, supporting him as he healed. 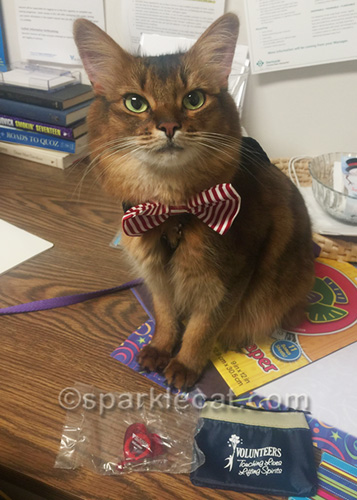 Sometimes the hospital puts little things in the volunteer room as gifts for the people who give their time. This time, they had little coin purses and cute, heart-shaped badge holders. 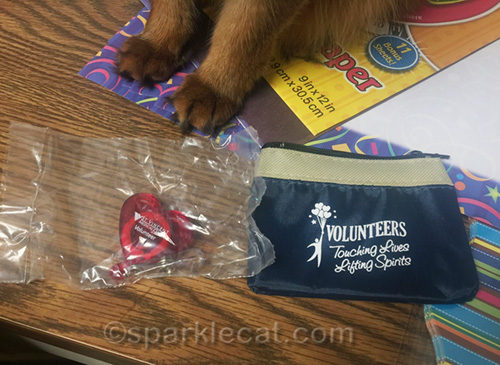 It’s a nice gesture of them, but they really don’t have to do it. The pleasure is all ours.