The Gift of Getting 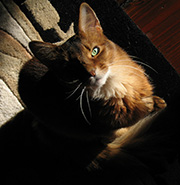 December is supposed to be some sort of holiday month, but you wouldn’t know that if you lived here. I was working overtime, approving documents in my human’s office. Nothing leaves this room until I sit on it.

I also had to sit on the DSL modem. Not because it was going anywhere — it was just the warmest perch on the desk.

Then, as if I didn’t have enough to do, my human enlisted my help for some cause of hers. I just hope that stopping global warming doesn’t affect the DSL modem in December.

It was cold here, and then it rained and we had unwelcome visitors — ants! Ick. They are nasty, not tasty like crickets at all. My human had to take my food away and feed it to the dog, who ate it, ants and all.

We had another unwelcome visitor too. I couldn’t believe my eyes when it showed up.

My human’s boyfriend brought it home from work, “just for the night.” Fortunately, he meant it. But I kept my eyes on it, just to make sure it didn’t even think of invading my turf.

Then we had Christmas. I have mixed feelings about Christmas. Sure, you get gifts, but there’s a price to be paid.

Fortunately my humiliation only lasted for a few minutes. Then the gifts came out. Since the economy (whatever that is) is “bad,” they were mostly cheap trinkets. But at least my human used some imagination when she was buying them.

Binga (the catnip junkie) was fascinated by the catnip-scented discs.

Boodie and I were more interested in the sparkly glitter balls.

Even better my human got some of my favorite cat treats from Trader Joe’s. Seriously, these treats are the best ever!

Plus the wrapping paper was really cool. I was so busy checking it out that I almost missed the Cat Dancer,

which is a really fantastic toy. It reminds me of the moths I like to catch.

The one bust was, naturally, the most expensive toy — something called “Thing in a Bag.”

My human presented it to us, and it turned out that it needed assembly and batteries and she was totally unprepared.

Then I looked at the label and it all made sense. Who in their right mind would get something for a cat from a company called “Happy Dog Toys”?

Then finally we got around to the big box, wrapped in the fancy gold paper. Boodie wanted to eat the bow, but my human assured us that there was something special inside.

And she was right! It was an empty box! I couldn’t believe my eyes. What a great gift!

Then my human had to spoil our holidays by leaving town just before New Year’s. Binga thought that maybe she could sneak along, but no such luck. Too bad. I wouldn’t have missed her.