Even before the holidays kicked into gear, I was getting stuff! Early in the month, a package came addressed specifically to me.

It was a free sample of some yummy cat food my human found.

It was snack time so I helped myself.

After that, things were sort of a blur. My human got into decorating. She didn’t do anything last year and I think she was making up for lost time. She brought home some crusty looking wreath. I was not impressed with it, and neither was Binga. 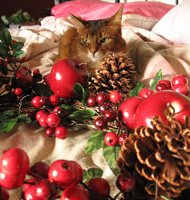 Then her boyfriend tried to string some lights up outside. The fun part was watching him test the lights before hanging them. Unfortunately, they stopped working the moment he finished putting them up. 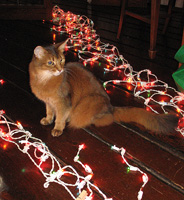 To be honest, we cats were not thrilled with all this activity because we knew what was coming. 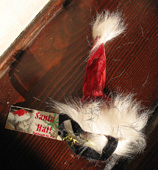 I do have to say we outdid ourselves this year, though, because my human couldn’t get any of us to wear the stupid thing. Not even for a second. That makes us heros in the cat world.

Undaunted by her failure, my human proceeded to put up the fake tree and decorate it. 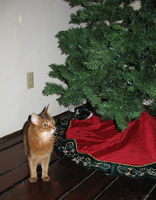 Binga knew that the silver plastic snowflakes were only good for one thing, even if my human disagreed with her.

She also got to the stockings before my human did.

Boodie didn’t care about the decorations. She was more interested in the box. 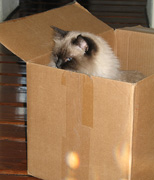 In spite of what she referred to as our “interference,” my human got the tree decorated and the stockings up. 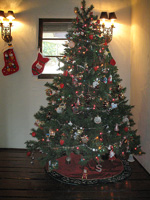 On Christmas morning the stockings were filled with gifts. This year my human knew better and didn’t try to feed us any crap about “Santa Kitty.”

Just because there were presents, it didn’t mean we wanted to get out of bed. Finally my human dragged Binga and Boodie upstairs to open their gifts. She left me in bed because, as she said, “I only have two arms and you squirm too much.”

Binga was not impressed with her gifts. 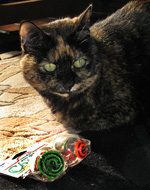 Well, except for the wand that twittered like a bird. She liked that. 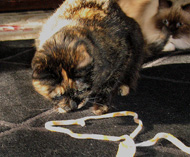 Boodie liked it so much that it wore her out. 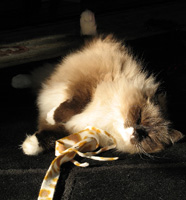 She also tried to open my gifts first. 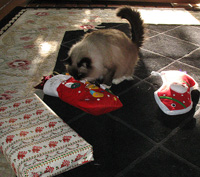 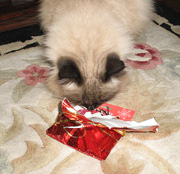 I don’t think Boodie was that impressed with the things she got, either. I don’t blame her. I mean, how much did those mice cost — a dollar?

And to top it all off, she got the boobie prize — a “festive” bell collar.

Luckily for Boodie, she was too fluffy and the collar disappeared under her fur. So my human tried to use me as a model. What an annoying way to be woken up. 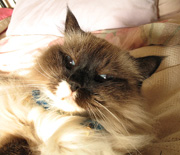 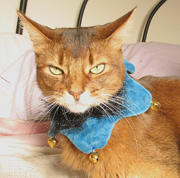 In acknowledgment of my displeasure, my human took off the collar and put it on a stuffed toy, where it belongs.

Then she brought me up to open my gifts. I was a little peeved to see that the other cats had already trashed the living room, leaving me with little to do except open the last few presents. 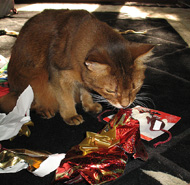 She got me some plastic things that are supposed to replace my favorite twist ties. Shows how much she knows — nothing can replace twist ties. 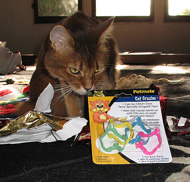 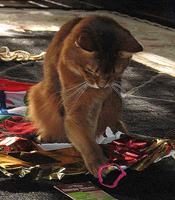 Then she gave me my “big” gift. “You have to share this with the other cats,” she told me. 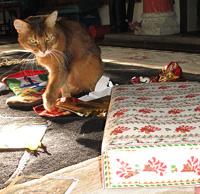 It was a “Gingerbread Cat Scratcher.” Oh, and it needed assembly. I wondered if Binga and Boodie would enjoy “sharing” all the wasted time I knew it would take for my human to put the thing together. 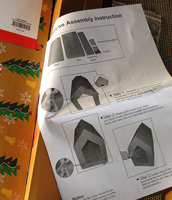 So while she proceeded to decipher the instructions, I helped supervise. 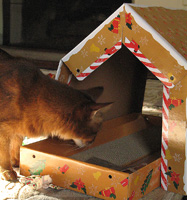 After a while, I got bored and occupied myself with other things. You know, playing with the wrapping paper, making a bed out of the empty stockings. The usual. 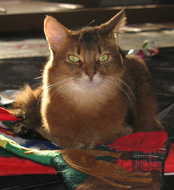 Eventually she got the thing assembled. ‘Bout time.