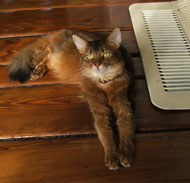 This has been a lousy month. I started feeling bad again and couldn’t jump. In fact, I didn’t even want to move around much because I was in so much pain. I just wanted to either sit in the hallway or hang out by the upstairs heater.

I didn’t even want to eat very much. 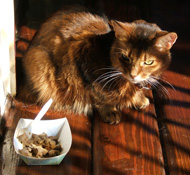 So my human packed me up and took me to yet another vet clinic. You know, I really do want to take care of whatever it is that is making it painful for me to move my back end, but I really hate these vet trips. 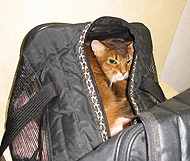 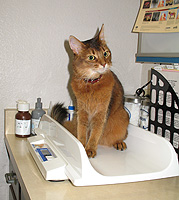 For about the umpteenth time in the past few weeks, I got weighed.

This vet watched me walk around and recommended some painkillers that didn’t work very well. So she wound up suggesting my human take me to an acupuncturist. Which, of course, meant another annoying car ride to yet another vet clinic. 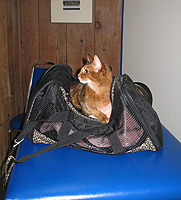 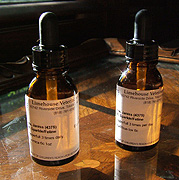 Between the latest painkillers my human picked up and the acupuncture, it actually seemed to work. The only annoying thing is that this new clinic gave my human these horrible homeopathic remedies that I’m supposed to take three times a day! When I see my human with that eyedropper in her hand, I run the other way. Yuck.

My human could tell I was feeling better because I started eating like normal, and I even caught a cricket for dessert one night. 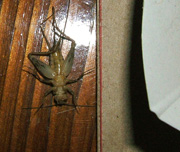 After all this bother, you’d think my human would try extra hard to give me a good Christmas but no luck. First off, she never put up a tree. She said she was “too stressed out.” HER stressed out? Her back and lower legs were working just fine the whole month. I don’t see what she had to be stressed out about. The second sign that things were going to be less than exciting this year was that box of stuff the humans get as a gift every year. Again, no meat for us cats. Boodie didn’t care. She had other uses for the box. 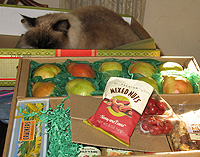 The humans opened their Christmas gifts on the bed. Our gifts never even got wrapped — my human just left them in the shopping bags. Boodie, not being very bright, thought the bags were the gift. 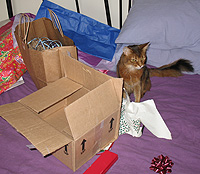 The first gift was something called a “Cat Charmer.” I didn’t like it — we already have one that’s like it, only better because it’s all worn and knotted up, the way we like it.

The next gift was some fishing pole with a toy on a string. Boodie liked it. I didn’t. 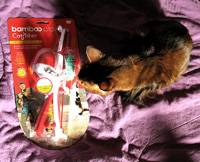 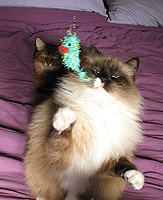 Then to end our totally lame Christmas, my human pulled out a small bag of catnip. It was supposed to be some “really potent stuff from up north,” sent by a kitten rescue, but as you know, I don’t care for catnip all that much. 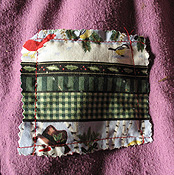 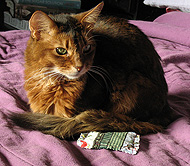 It only took a few moments, however, for you-know-who to commandeer it. 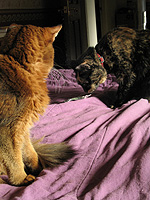 Than, as if things weren’t bad enough, a few days later, the humans left town! Because the other cats kept eating my food before I could finish it, my human decided to put me in the upstairs apartment area all by myself so I could “eat in peace.” I basically spent the last couple days of the year in solitary confinement.