It really is tough being a supermodel. My human kept me busy with photo sessions for a while. First I had to pose for the inevitable holiday eCard. That was okay since the prop was a cool toy mouse.

The only problem is my human didn’t want me to keep it. After she was done taking pictures she took it away! That was thoroughly rotten of her. She said I could play with it “later.” Later turned out to be a few weeks. Does she realize how long that is in a cat’s life?

The other photo session wasn’t as much fun — she had some “festive” holiday charm bracelet that she expected me to wear as a collar.

I couldn’t even complain, really — I am over 3 years old, so according to the label I am old enough to wear it.

My human decided to get all arty with the lighting and shadows. It was an awful lot of effort for a cheap piece of costume jewelry that she got at Big Lots, of all places. 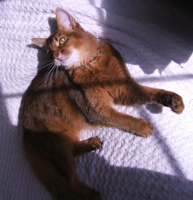 After all this, I was kind of relieved that she and her boyfriend left town for a week. Apparently, he was doing some “gigs.” My human called it a “working vacation” for her, so she packed up her laptop. The carrying case, however, was completely covered in cat fur. I wonder why.

to clean it up, and acted like it was all my fault! Ahem — there are two other cats here, you know. 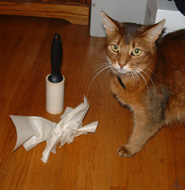 And they were busy — Binga decided it would be fun to see which sweaters were going to be packed.

Boodie, meanwhile, decided to take her cat fur into my human’s boyfriend’s suitcase.

But soon enough the fun was over and they were gone. When they came back, I was happy until my human pulled this thing out of her bag. She acted like it was all special and she had been lucky to find it on eBay. She was so excited, in fact that she had it shipped to the place she was visiting!

Now, if you ask me, I don’t think that thing looks like a Somali cat at all. Naturally that didn’t stop my human from forcing me to pose with it. 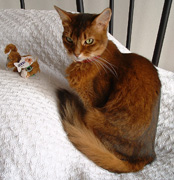 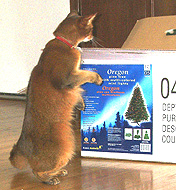 Fortunately the novelty wore off quickly because it was time for my human to put up the fake tree. She got a new, bigger one this time — all the better to hang her dozens upon dozens of ornaments, none of which we cats are allowed to play with.

That didn’t stop Binga from playing with the tree parts. 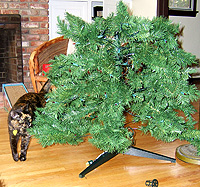 Boodie wanted to join in the fun, but Binga insisted that messing up the tree skirt was her job alone.

Eventually the tree was decorated and presents started appearing under it. And cats.

I helped my human wrap some of the presents. I noticed a familiar face on one of the gifts. 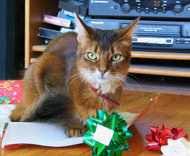 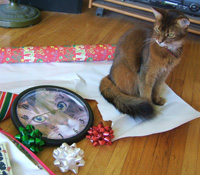 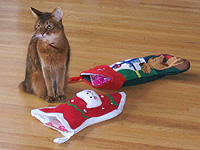 I was beginning to wonder where the cat gifts were, but I didn’t see them until Christmas morning. They were stuffed into a couple of stockings. Obviously I wasn’t getting a second cat tree this year.

The stockings, I discovered, held an array of cheap cat toys. At least I got the mouse back.

There was also a very potent bag of catnip from somewhere up north called Safe Haven for Cats. You can guess who commandeered that.

The stupidest gift of all was a little plastic Hello Kitty that talked, lit up and danced. Even though my human claimed that she found it at the pet store, I don’t really think it’s a cat toy.

Boodie was the only one (other than my human) who was interested in it. I wasn’t having anything to do with it. 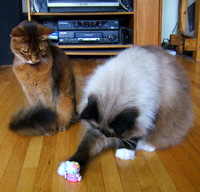 Binga, meanwhile, decided she was more interested in the human gifts under the tree.

Boodie was happy with all the toys, but I felt it was a pretty lame Christmas. 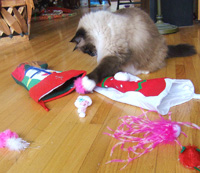 And then I noticed something just beyond my reach….

It was the best cat toy ever! 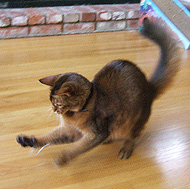