It took my human long enough, but she finally found that calico stray a home. 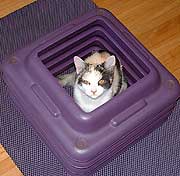 By then, of course, I was starting getting used to her. She certainly knew how to play!

But she did have some weird habits, like her fixation with water.

And she destroyed one of my favorite toys. 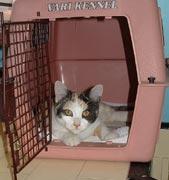 In any case, the humans packed her up in the cat carrier one day and carted her off. The only one around here who really missed her all that much — other than the humans — was the dog.

According to my human, the cat found a home just in time! She kept saying, “Now I can put up the tree! There was no way I could have put up a tree with her around!” The whole tree thing kind of confused me. I wondered if that meant she was going to get us another cat tree like she did last Christmas. It was even more confusing when she went to the closet and pulled out this “tree.” It wasn’t a tree at all — it was a big box that Binga immediately had to check out.

Then my human began pulling all sorts of other, smaller boxes out of this big box. They were filled with fake, brushy branches. I took a bite out of one, but it wasn’t very tasty. 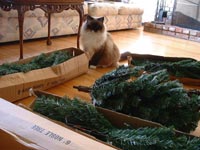 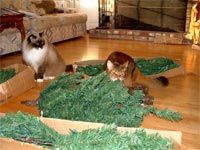 So here were these branches all over the floor. My human started putting them together and it began making sense, in a weird way. 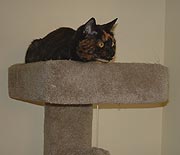 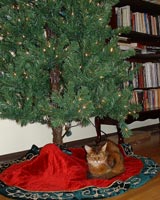 Then my human brought out a big can that appeared to be full of cat toys. But, much to our disappointment, they weren’t meant for us at all — she hung every last one of them on this fake tree. What a gyp. Even worse, she hung the dullest, most boring ornaments on the bottom, at our eye level. We weren’t even compelled to bat at them. 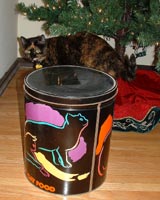 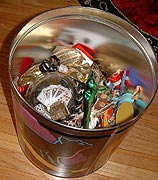 Although my human gets excited about it, I am not a big fan of the holiday season. There’s just not much in it for cats. For example, my human and her boyfriend got a big basket of goodies from his older brother and his family. But it was all fruit and cookies and chocolate and other unappetizing items. There was not one ounce of meat or tuna in that huge basket!

And then there’s the stupid modeling thing. My human tried getting me to pose with a fake poinsettia in my collar. (At least she was smart enough not to try it with a real poinsettia — they’re poisonous to cats.) I really didn’t want to wear this thing. I did everything I could to ruin every last shot. 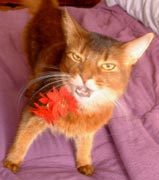 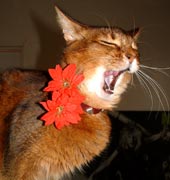 Unfortunately she managed to sneak in a good photo.

Luckily things got better around Christmas. 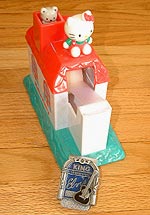 The one really fun part of the holidays — at least as far as cats are concerned — is wrapping presents. My human wrapped a bunch of stuff for her boyfriend, including an Elvis money clip. Note the unusual tape dispenser.

But of course I didn’t really care about the presents. They weren’t even for me anyhow. The really good stuff was the wrapping paper and the ribbons. 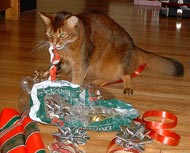 I really don’t understand why humans don’t get this. On Christmas morning, my human and her boyfriend spent all this time unwrapping all the presents they gave each other. (Among other things, he gave her a pair of Hello Kitty car seat covers. I suppose they’re meant to match the tape dispenser.) 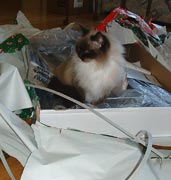 But they completely ignored all the really good stuff — the empty boxes and crumpled up paper! They just shunted all that aside like it was junk. How clueless is that?

Then my human showed us all our gifts. Some were hanging from the fireplace mantle.

Other presents were sitting under the tree. When Boodie saw them sitting there, she decided to add a little present of her own — some toy mouse she dug up from who-knows-where. 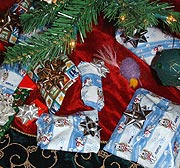 We were quite pleased with our wrapping paper packages… and then we realized that there were actually cat toys in them. 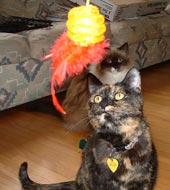 My human tried to convince us they were brought by someone called “Santa Kitty.” That’s really bogus, if you ask me — if there really were a “Santa Kitty,” she’d bring us wrapping paper and skip the toys. Seriously. Some of the toys were okay, but others were really lame.

My least favorite toy was the “Cy-Purr Mouse.”

It was all electronic and annoying. And it was too big to easily bat across the room. Boodie and I were not impressed. 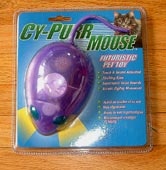 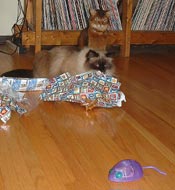 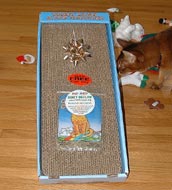 Binga got so bored with the whole thing that she went upstairs and took a nap. Too bad for her, ’cause that’s when my human brought out the best gift — a brand new Alpine Cat Scratcher!

So now we have one without the toy ripped out.

And since Binga wasn’t around, Boodie got a chance to play with it without getting beaten up.

Just when I had decided that Christmas wasn’t so bad after all, my human ruined it by bringing out one of her horrible “surprises.” 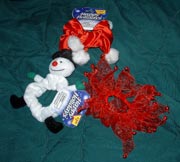 That’s right — “festive” holiday collars. I wonder if she noticed the warning on a couple of them.

Maybe not, since she proceeded to torture us with them. Binga’s looked dumb, and Boodie is so fluffy you could barely see she was wearing hers. 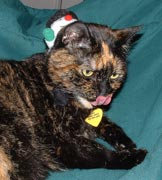 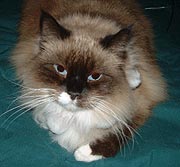 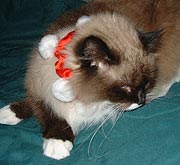 My human gave up on Boodie completely and put hers on Binga. Binga was thoroughly offended. 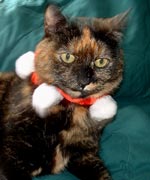 I was appalled — I couldn’t believe she got me yet another clown collar!

I got fed up with her attempts to make me festive and hid behind her old printer until she promised to take the hideous thing off. Geez. If I wanted to be in the circus, I’d run away and join it. So much for “happy holidays!” 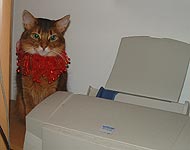