I’ve discovered a new game in the afternoons when I’m bored — playing with Binga’s tail. She hardly ever says anything when I do this — she must not mind very much.

The month had barely started when my human’s car died. The transmission exploded, and she had to have it towed across town. Then she had to buy another car. This bummed me out — not because the car died. I hate the car. I figured that it meant no cat tree for us this year. When my human came back from the car place (she got her car from Enterprise Car Sales), she returned with what she thought would be fun toys for us.

Fun toys — ha! They were dumb toys. Really lame. The car couldn’t hold my interest for even a split second. I didn’t bother with the ball — my human couldn’t even blow it up properly.

Christmas gifts eventually began arriving for my human and her boyfriend. We were fascinated by one big box and couldn’t wait for them to open it. It turned out to be a big basket of fruit.

This was also lame — no sausages or meat of any kind. I blame this on my human’s boyfriend — he’s a vegetarian and it was from his older brother and his wife.

It was shaping up to be the worst Christmas ever! My human came home with stupid pet hats that she expected us cats to wear. She grabbed Binga and tied the Santa hat on her. I sniffed at it, but she couldn’t get it on me — I’m too fast.

Boodie put her paw down — right on the hat. She wasn’t going to wear it either.

There was also a reindeer hat. Again, the only one of us that had to suffer through wearing it was Binga. Me and Boodie ran away.

Embarrassed and humiliated by the whole ritual, Binga proceeded to take her aggressions out on the Santa hat.

The humans had their Christmas a couple of days early. Just like we expected, there was nothing for us.

We were beginning to think that we were out of luck, and that our only festive toy would be the little Santa that my human gave Binga two years ago, before I was even here.

Then a miracle happened. A couple of days later my human came struggling through the back door with something amazing.

A 5-foot tall cat tree! Granted, she did a lousy wrap job with the ribbons, but it’s what’s underneath the wrapping that counts.

Frankly, the thing was so big it was kind of intimidating. Both Boodie and I were kind of suspicious of it. The only one who took to it right away was Binga. In fact she took to it so much she wouldn’t let us get near it!

Boodie decided she wanted to play on it and Binga chased her away, up the stairs into the hallway. She body slammed her and made her hiss. 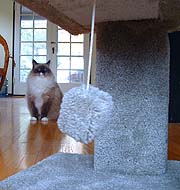 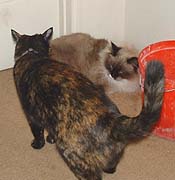 I watched all this in horror. Binga had gone insane and our Christmas was ruined! 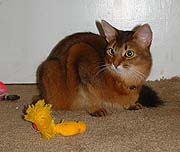 Finally, my human did something really smart for once. She locked Binga in the kitchen and put me on the cat tree all by myself. I got to check it out, break it in — and I rubbed my face over every inch of it so that it smelled like me.

When she finally let Binga out of the kitchen, she walked over and sniffed the cat tree from top to bottom. She realized that it was meant for all of us and stopped acting like a possessive freak. Now we can all take turns being Queen of the Cat Tree.