I still think Binga is grouchy and mean, but at least she seems to be calming down. One day, whileÂ the bed sheets were being washed, the two of us bonded over an old Santa toy that she got for ChristmasÂ last year.

I still think she’s got a bad attitude, though. In fact, I think this is how she sees herself:

Frankly, the humans both buy into this, too. For Christmas this year, we all got presentsâ€”BoodieÂ and I got little toys. They sort of matched our furâ€”Boodie’s was white and mine was light orangey-brown.

But Binga got the really good toyâ€”a pole with not one, but two sparkly, fuzzy balls!

I’m really jealous. Binga gets all the best toys and we’re not allowed to play with hers. “You’veÂ got your own toys,” says my human, “and besides, you’ve got at least a dozen sitting around god-knows-where.”Â Like once the thing rolls under the couch or flies under the dresser I’m gonna be able to get it back.

Boodie, as usual, doesn’t care. She likes carrying all these cheap, fuzzy things in her mouth. SheÂ walks around the house meowing like she’s got something really great, like a bird or a mouse. But it’sÂ just a stupid little toy. Sometimes I wonder about her level of intelligence. So I’m stuck with my little wussy toys while Binga gets the good stuff. 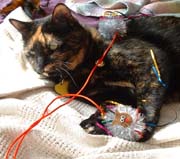 These toys don’t last too long either. Especially after I’ve taken out my aggressions on them. 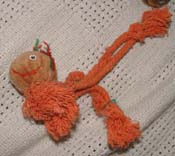