You are here: Home / Diary / Chickenhawk

We had the oddest visitor the other day! And he totally snuck in on us. In fact, we had no idea he was even around for hours. All I knew was that the dog was acting weird, whining and refusing to go into the enclosed patio, where her doghouse is. Then my human went out to feed her and I heard this commotion! A lot of scrambling… and flapping. I took a peek through the leaded glass doors and I couldn’t believe my eyes! 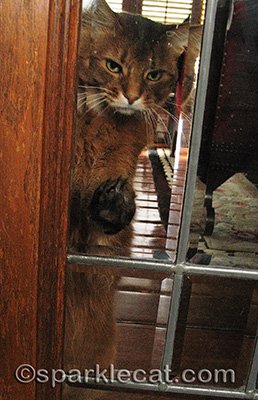 It was a hawk, trapped behind the doghouse! There’s been a mouse eating the dog’s treats, so he probably flew in, thinking he was getting an easy snack and then couldn’t find his way back out. 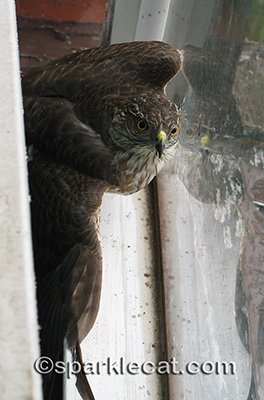 My human pulled away the doghouse, thinking that maybe he would find his own way back out. The hawk wasn’t very big, not quite twice the size of a dove. So he must be pretty young. 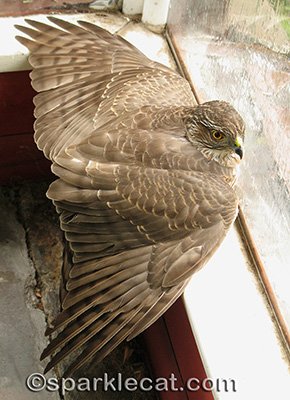 And dumb, too, because he couldn’t figure out what a window was, and why it was stopping him from going outside. (I bet he didn’t catch the mouse either.) He tried flying off once and smacked right into another window! You know how hawks have that bone-chilling cry? I swear, this one let out a screech that sounded more like a whimper. My human finally had to throw a towel over him and take him outside herself. Once she tossed him in the air, he had no problem soaring away. 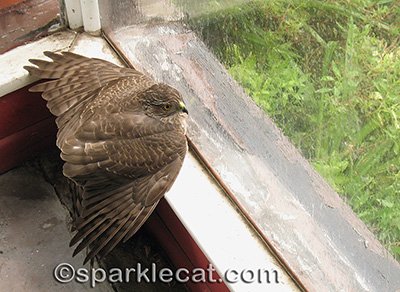 But he did leave us a gift — this feather. I am kind of bummed, though. I was hoping that maybe my human would bring him inside and cook him for me, kind of like cave humans did for their cats in the prehistoric era. So I guess I will never find out if a hawk tastes like chicken. 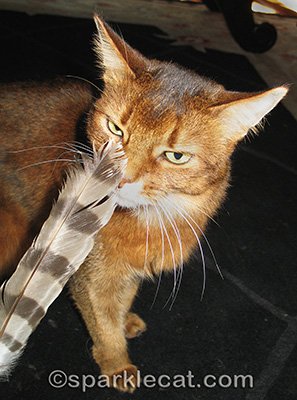