You are here: Home / Diary / Caturday Art: The By-Hand Edition 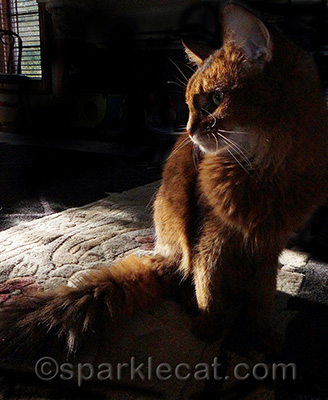 While this just looks like a photograph, although a cool, dramatic one, there is actually some artistic work going on here. While my human uses filters like crazy when she is doing digital art, sometimes she has to dip in and do something manually, and this was one of those times. Here is the original photograph: 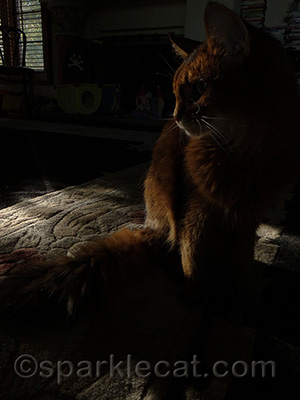 My human was trying to get a contrasty, late afternoon shot, but it wasn’t quite working. I was too dark. 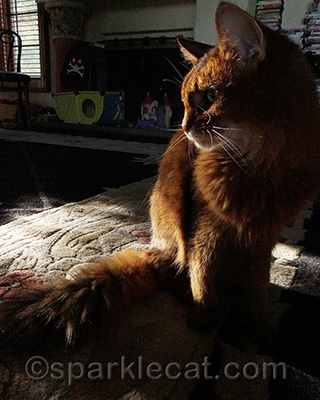 But when she lightened the photo, the busy, messy background popped out too. She tried masking me and the highlights and darkening the rest of the photo, but with my fur, it was pretty much impossible to do it and make the edges seamless. So she used a tool she rarely needs anymore, but used all the time back in the “old days”: the Dodge and Burn tool. When she was shooting film and developing photographs in the darkroom, she did this all time. She would cover up parts of the image as she exposed the photo paper if she wanted to keep them lighter (that is dodging), or expose certain other parts for longer (usually by cupping her hands over the rest of the photo paper) to make them darker (that is burning). When she was first using Photoshop Elements over a decade ago, it had tools to do this digitally. Eventually she learned Photoshop techniques to adjust exposures that made dodging and burning by hand unnecessary… except sometimes, like with this photo. 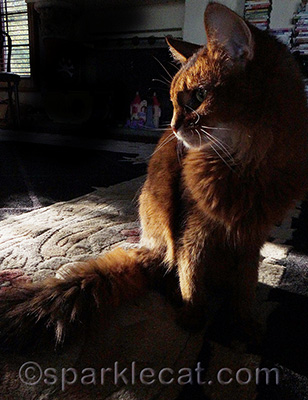 With a big-sized “brush” tool, my human started “burning” in the background manually to make it darker. 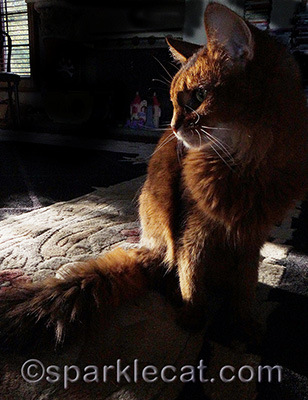 Then, the closer she got to me, she began reducing the brush size, and was very careful around my ears and whiskers. She wondered if she should black out the window in the background, but figured that without all the other distracting elements, it worked all right because it was clearly the source of light.

So as you can see, there was a lot more going on with this photo than you might think!

You can see more from this week’s Caturday Art participants here!