My human usually doesn’t think about any specific way to start the new year… but a few days before 2017, she got this email: 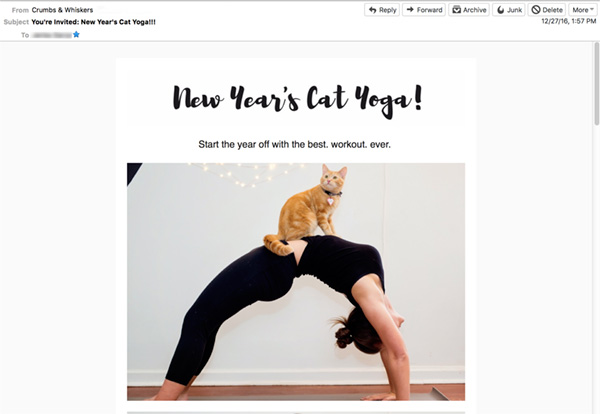 It was from Crumbs & Whiskers, a recently opened cat cafe. They were offering two cat yoga sessions, for the first time, on New Year’s Day. My human jumped on it right away, and she emailed a friend of hers who signed up too. It’s a good thing they were quick — both classes sold out in a matter of hours. 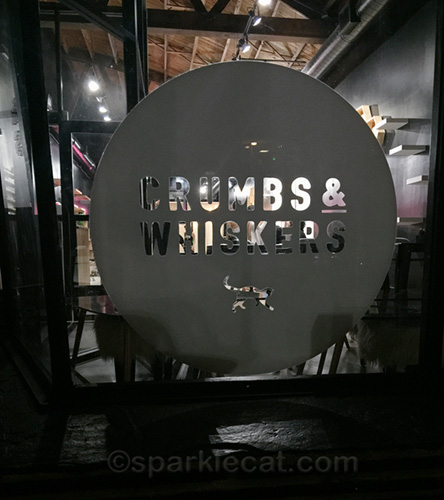 My human and her friend signed up for the second session. They and the other classmembers filled the entryway as they waited for the first session to end. Everyone was really excited. 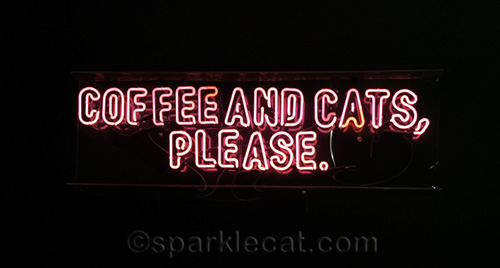 This sign was on the wall… but this evening, nobody brought coffee, just yoga mats. 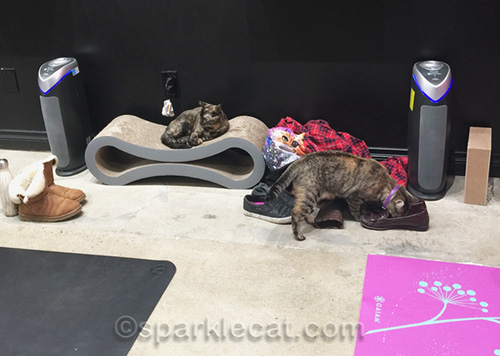 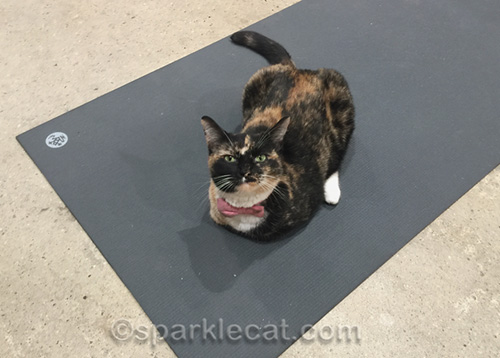 Here is the main feline yoga instructor. You might notice she is wearing a pink collar. The girl cats wore pink collars, and the boys wore gray ones. And there were some kitties wearing purple collars, which meant they had a bit of an attitude. 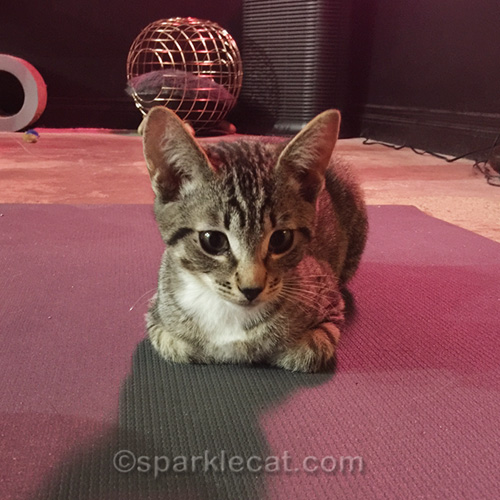 Although the humans there were all adults, kittens were allowed in the yoga session. 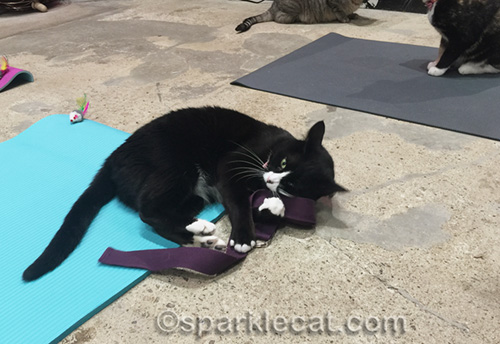 Here is one cat showing how to properly use a yoga strap. 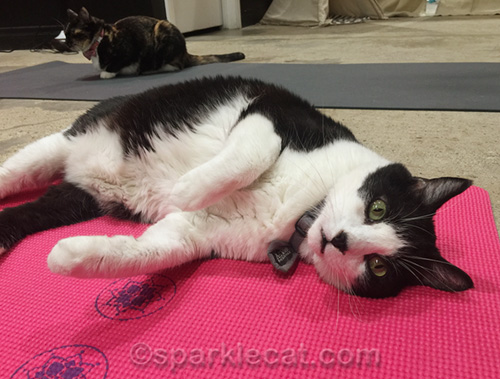 Some humans got their own feline yoga instructor. My human was one of them. 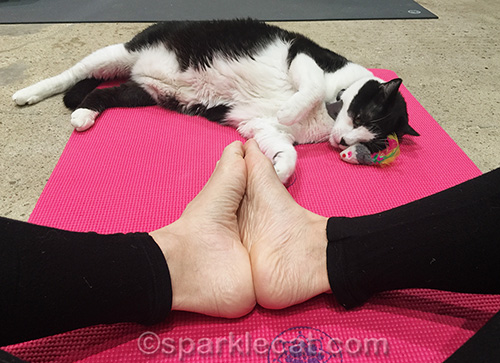 Sometimes he had to correct her form. 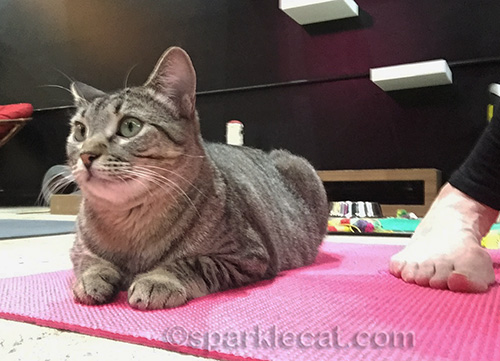 Eventually that instructor left, and another one showed up while my human did standing poses. 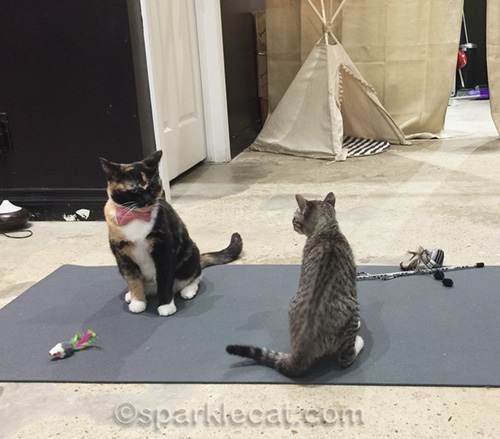 As you can see, the main instructor was a stern taskmaster! 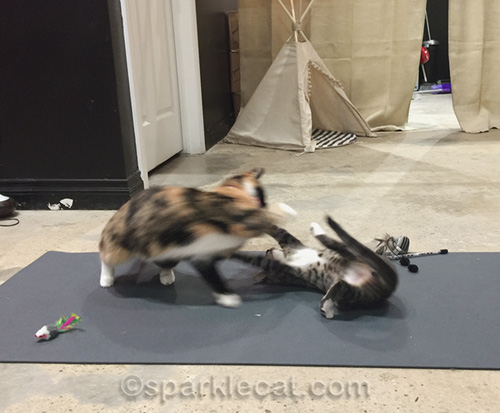 There were even a few arguments. 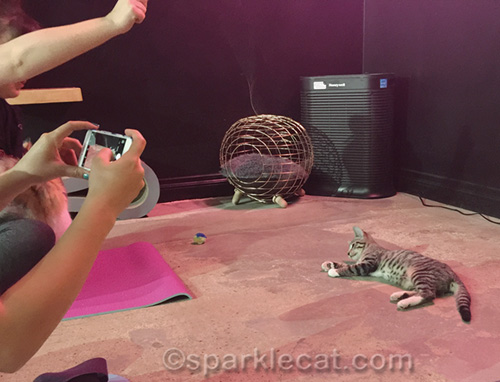 Although a lot of yoga got done, sometimes it was hard for the human students to concentrate because of all the cuteness! My human says she actually had a good yoga session, even if she did pick up her iPhone and sneak a few photos when she was supposed to be doing a pose. The cats were busy wandering around and checking everybody’s form — and seeing if anyone wanted to play. After the yoga session was over, everybody got to hang out for a few minutes and take more photos. If Crumbs and Whiskers has more yoga classes, my human and her friend are definitely going again! 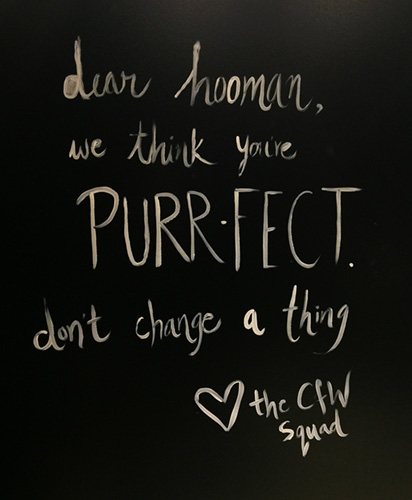 My human saw this sign in the restroom after the session was over. She thought it was a fitting end to a cat yoga class.

In case you are wondering, all the cat instructors are available for adoption.