You are here: Home / Diary / Cat Shows and Other Adventures 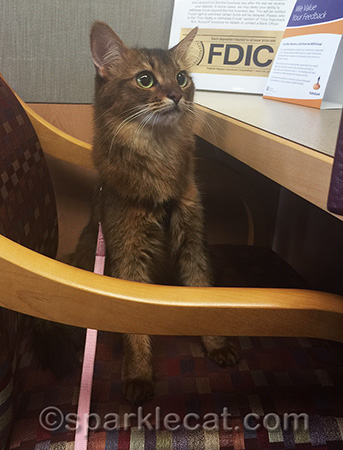 As many of you know, I had a cat show this past weekend, but I had lots of other stuff to do too! Even before getting to the hotel, I had to supervise my human on an important errand. She had some business with a bank and the closest branch was right by our Ontario, CA hotel room. They said it was okay for me to be there, so I hung out for an hour and a half and made sure everyone did their job right. I also made some new friends. 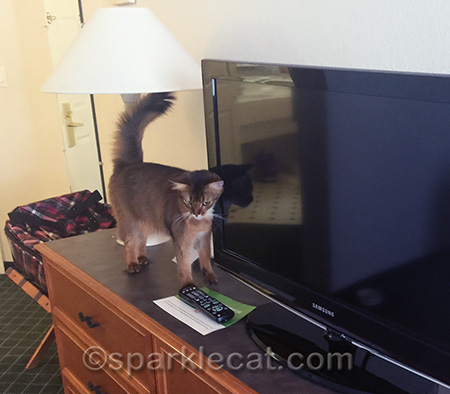 I was very excited about this trip because I got to stay at my favorite hotel! Even though it was a different room, it looked exactly like the room I had before. As soon as the cat carrier was opened, I proceeded to mark everything in the room as mine. 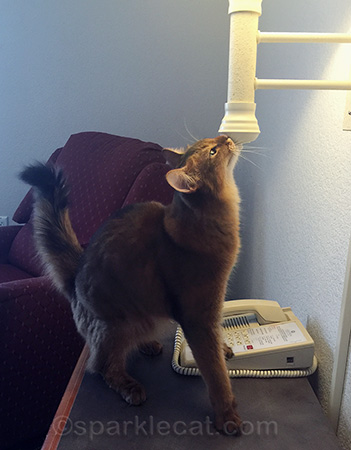 It was a big room, so there was a lot of stuff that needed me to rub on it. 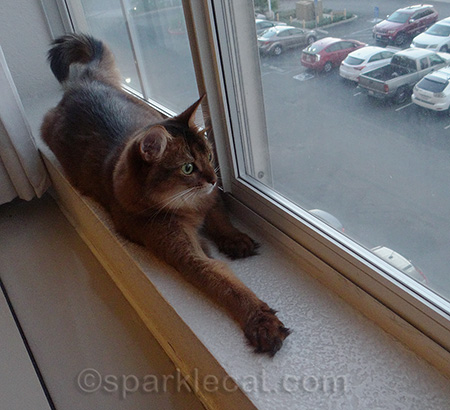 We were on the fourth floor, so I had an awesome view! Don’t worry, there was more to see than just the parking lot. I spent a lot of time in my room here. 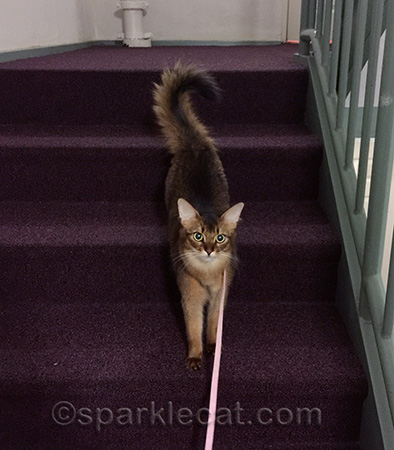 I also went wandering all around the hotel on my leash both nights we were there! 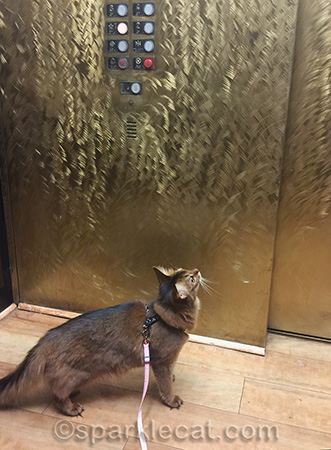 My human made a new discovery about me: I am not afraid of elevators! I would sit by them and watch them open like it was no big deal, and I didn’t mind going up and down in them without her holding me. 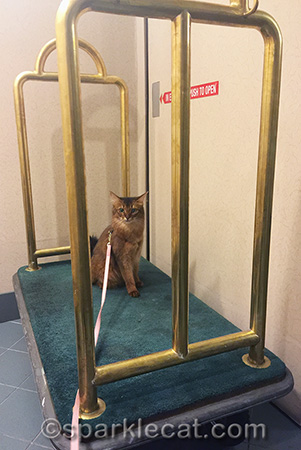 Wouldn’t it be fun to be a bellhop? ‘Cause they get to hop on these things and ride around — that is the job, right? 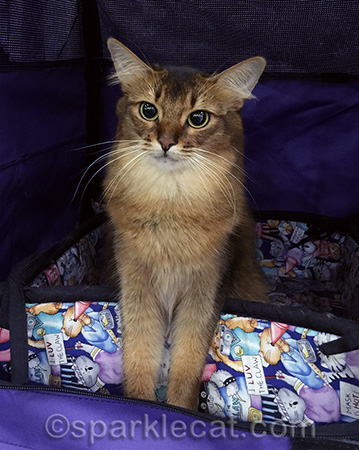 So I wandered around at night, but during the day, I had to do the cat show. As you probably remember, I had some problems last time and my human was wondering if I wanted to do shows anymore. The good news is I was mostly better the first day of the show, and was perfectly fine on the second day! Which is good because people who know who I am are starting to show up more often, and this is such an easy way to meet them. The show itself was very tough — my competition in CFA this season is a young male Somali who is just at his peak in looks… and he is really handsome! Like me, he is ruddy colored, and that always has a slight edge in the rings, but males have even more of an edge because they tend to be bigger and more impressive. At some point, you’ll get to see photos of him, but my human was too busy this time to take a lot of photos of my rings. 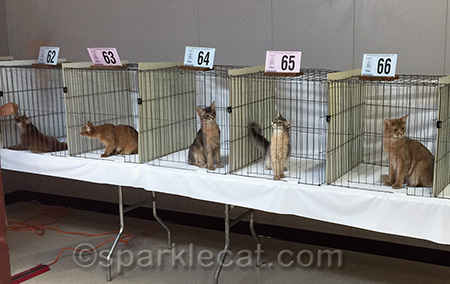 She was helping a breeder who brought four kittens! My breeder was there too and she brought one (he is number 64), so there were five Somali kittens total. Funny enough, none of them were ruddy. The two on far left are red; numbers 64 and 65 are blue (a dilute version of ruddy); and the one on the right is fawn, which is the dilute version of red. I think every one of them, or nearly every one got Best of Breed in the kitten rings at some point, but only a couple (one red, and my breeder’s blue) got finals. 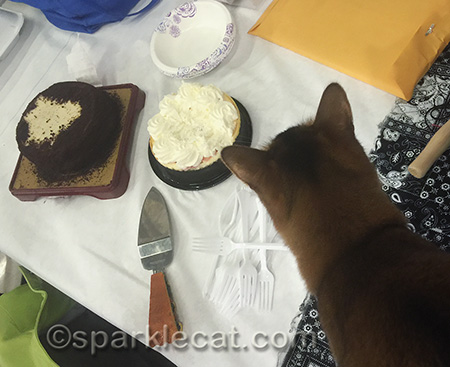 My breeder brought a couple of cakes — an organic chocolate cake and a cheesecake — to celebrate my CFA grand status and regional awards from last season. That was really, really nice of her! 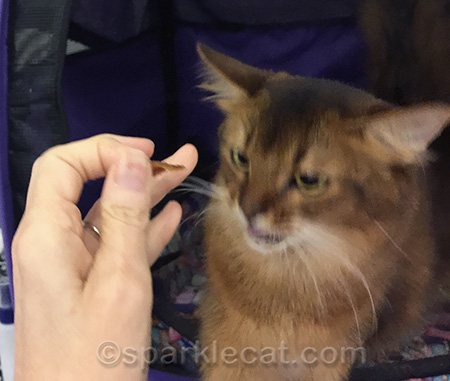 And… I got bacon! The nice breeder on the other side of me had some bacon, sausage and eggs on Sunday and she let me have some of the bacon. My human tried to get a photo but I attacked and devoured it so fast, this was the best she could do. 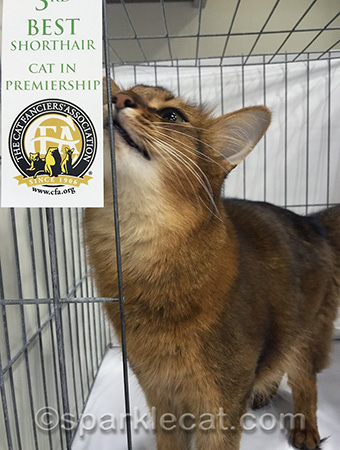 Oh, and I did get some finals! In fact, in a couple of rings, even though the boy got picked as Best Somali, both he and I got to be in finals because the judge liked us both so much! 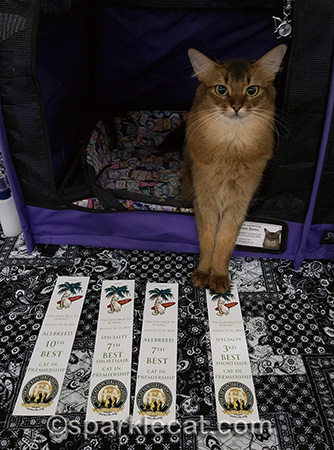 So in the end, I went home with four ribbons, which was actually better than my human was expecting. 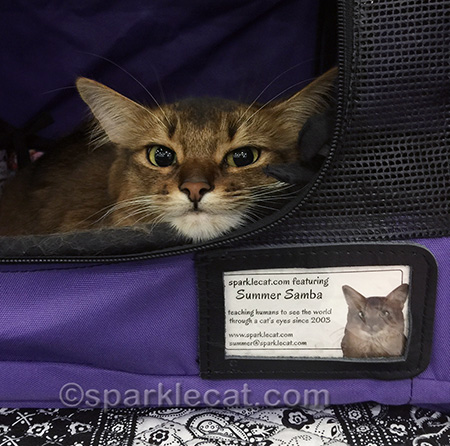 It was an exhausting weekend… but I can’t wait to do it again!