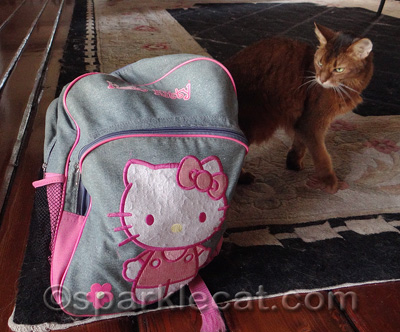 Since my human went to BlogPaws as a representative of my cat blog, and she was assigned the task of reporting about things that mostly concerned cats, you may not have noticed something about the conference that was pretty obvious if you were actually there: we cats were shrugged off as second-class citizens!

I will start off with the swag bag. Swag bags are supposed to be the highlight of any conference of this type. My human did not bring the BlogPaws swag bag home because it had nothing but dog junk in it! She opened it up, saw what was in there, and marched it right back to the registration booth and returned it! The BlogPaws humans claim they had a hard time getting cat swag for us kitties… maybe they should talk with the Cat Writers Association humans. There was enough cat swag left over at their conference last year to make generous donations to four or five different rescues.

The Cat Lounge this year was — I am sorry, there is no other word for it — pathetic. Sadly, Kate Benjamin of Hauspanther was not able to attend this year — last year, she created a fun, lively space for the blogging cats’ humans to hang out. This year, the only bright spot there were the toys she sent over. 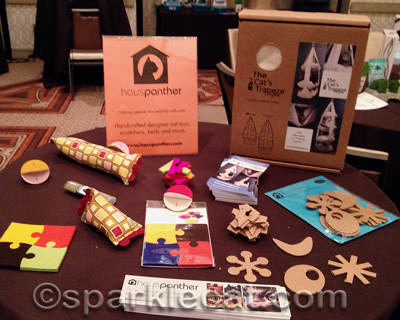 As for the rest of it, here is what BlogPaws apparently thinks are important to cats and their humans: litter boxes. 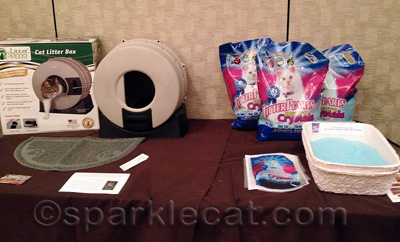 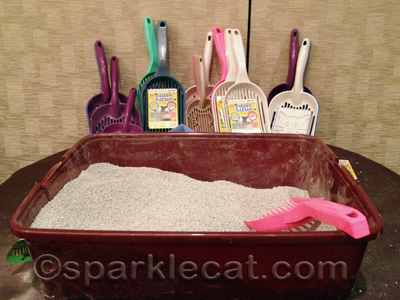 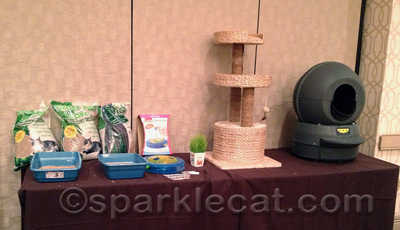 It was kind of insulting. One of the staff (a cat blogger, of course), went out and bought some toys and scratchers to supplement the paltry selection in the Cat Lounge.

The whole weekend, my human got the impression that a lot of people there really did not get cats at all. Take the slide from this talk for example — they thought they would be cute and use Grumpy Cat: 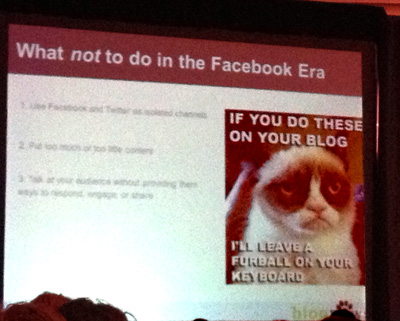 Hello! They aren’t called FURballs — they are called HAIRballs! They could not even get the jargon right.

I was really hoping my human was going to come home with a fun package of swag — a bunch of toys, treats and other items of feline enrichment that I could share with my readers. I wanted to have a giveaway that included my international readers, since they are so often overlooked when a company sponsors a giveaway and does the shipping themselves. So I nearly wept when my human opened up the backpack and I saw this lame selection: 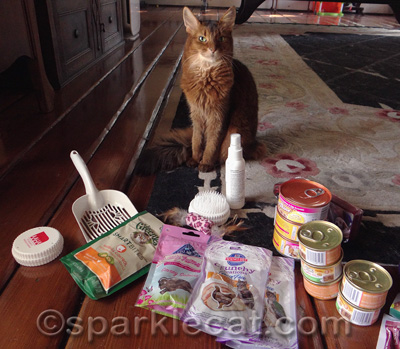 Okay, I confess — I’m not a weeper. I was mostly annoyed. Some cans of Friskies, a couple packages of treats and a plastic promotional brush. Oh, and a litter scoop, as if anyone needs another one. I would not insult my readers by making this a giveaway. 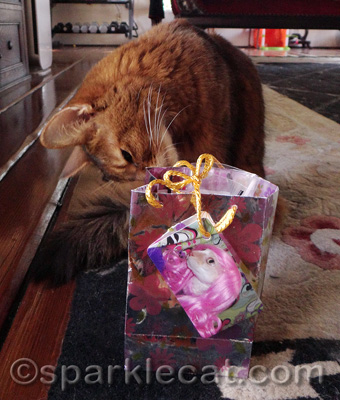 The only bright spot that came out of that half-full backpack was the little goodie bag that the Curlz and Swirlz blog human gave out to her fellow cat assistants. 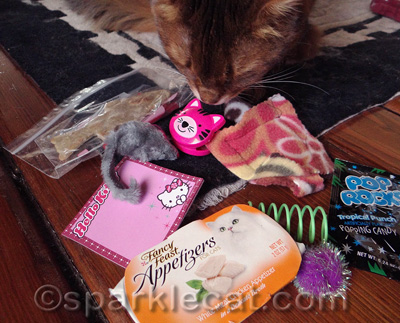 It was full of fun and delightful scents! And even a couple of things for the humans. 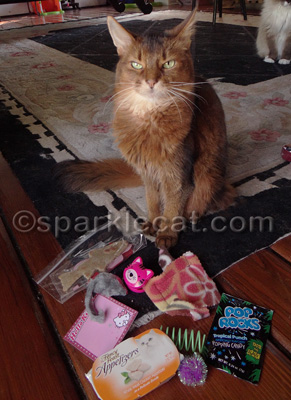 BlogPaws humans, I hope you are reading this because I want to say that this little bag of treats and toys was ten times more awesome than anything you guys had to offer us cats!

So does this mean my human was so unhappy with BlogPaws that she would not go back? No! Not at all — in fact, she is already signed up for next year in Las Vegas! She does think they need to understand that we cat bloggers are a very big and important force, and that cats in general are more popular on the internet than dogs! They need to understand cat culture and enrichment way better than they do now. And it is up to us cat bloggers to teach them, the same way we teach our own humans.

Besides, my human had loads of fun hanging out with all the other cat blogging assistants, running around and having drinks with funny decorations. 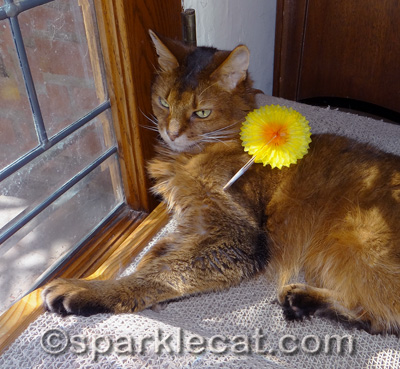 And the last night, at the party after the awards when many of the cat blogger humans were gathered together, there was a camaraderie that is worth treasuring. Plus there were tiny tiaras. Which brings me to my last gripe about BlogPaws: 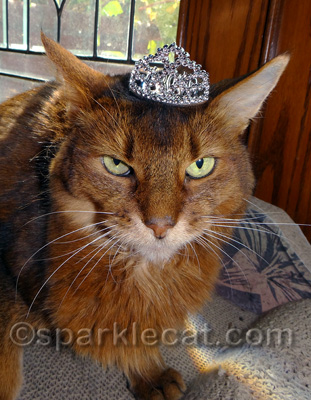 I was hoping it was going to get lost in the hotel room.