You are here: Home / Diary / Awards and Angst in Visalia 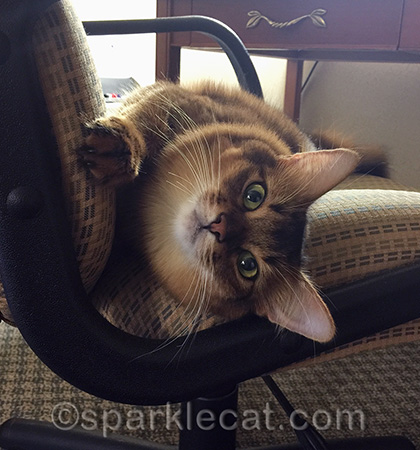 The TICA cat show and awards banquet in Visalia turned out to be a roller coaster weekend! At least I enjoyed the hotel room. 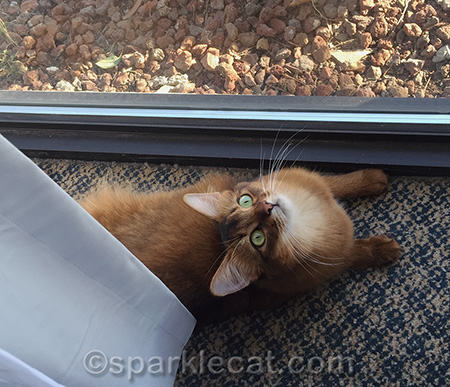 I spent a lot of time looking out the window. 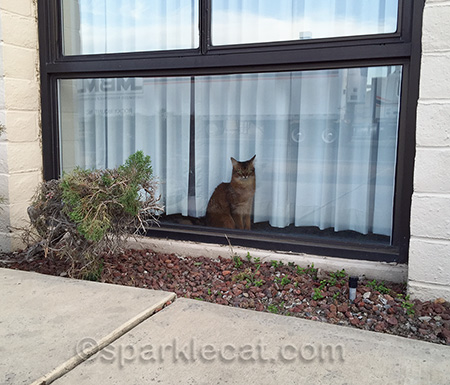 Even if the view was just of a parking lot. 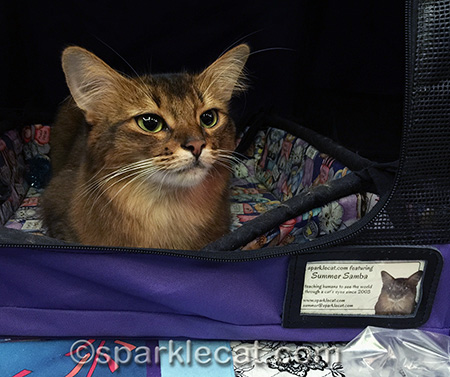 This was a huge cat show! Hundreds of people showed up just see all us kitties. 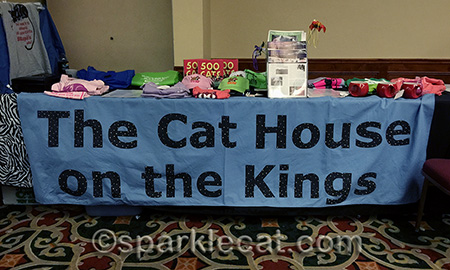 You know how most cat shows have a rescue there with adoptable kitties? Well, this show had the world-famous Cat House on the Kings there! Coincidentally, almost exactly a year ago to the day, my human was up in this area, visiting this sanctuary! 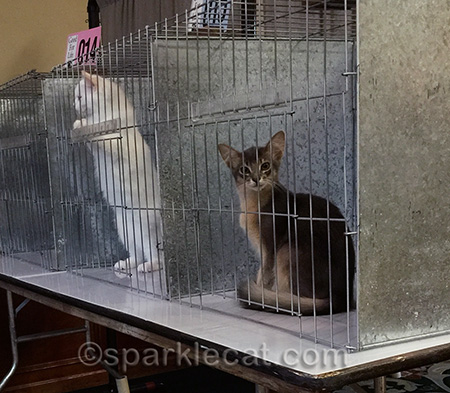 I also had a relative there! My half brother, Tajhara Chill Factor, came up for his very first show as a kitten! He is a blue Somali (I am a ruddy), just a little over four months old, and his birthday is exactly the same as mine — March 19 — only a year later! He and I share the same mother, Bluesette… I wonder if she planned her kittens that way! 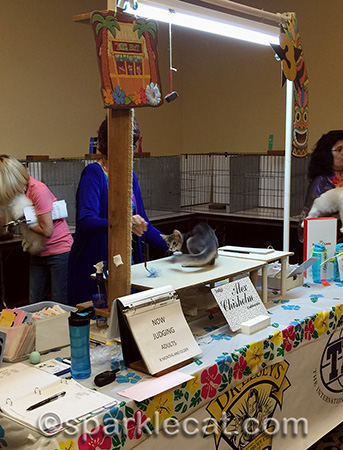 He was a little unsure of himself at first, but eventually he caught on that showing was fun and the judges were more than happy to play with him! He actually got several finals… and the last judge on Sunday gave him Best Kitten! Which is a real compliment, because that judge really knows the Somali breed well. 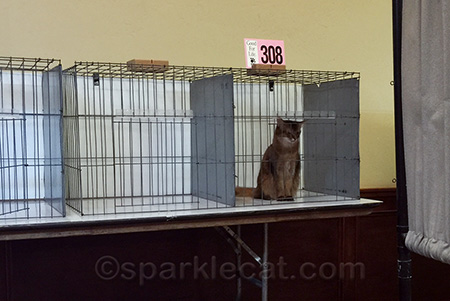 I didn’t have as much fun as my half-brother. Nobody knows exactly what upset me, if it was super-stinky stud spray in one ring, or the really crazy, annoying Norwegian Forest cat I was often caged next to, or something else more mysterious, but I started getting upset and hissing in the rings! Supposedly, I was not “that bad” compared to some other cats, and judges don’t care if you hiss as long as you aren’t mean, but I have a pact with my human that if I don’t want to show anymore, I don’t have to. She also worried a lot about causing damage to my usually easy-going temperament and wound up pulling me from the last ring of the first day, even though that judge has liked me before. The next day, she made sure I was separated from the other cats whenever I went to a ring, and I was better, but still stressed out. 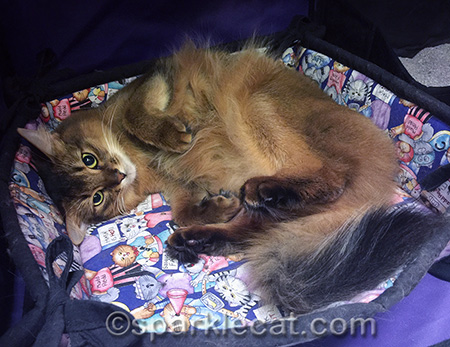 Even though I didn’t enjoy myself in the judging rings like I usually do, I still enjoyed meeting people, and there were a lot of people who came by to see me and visit! I was more than happy to play hostess with everyone. I liked that lots. 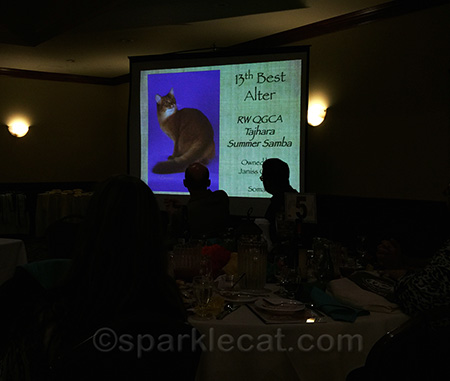 Ironically, after my problems in the rings the first day, my human had to pick up some awards for me at the TICA Southwest Regional banquet that night. 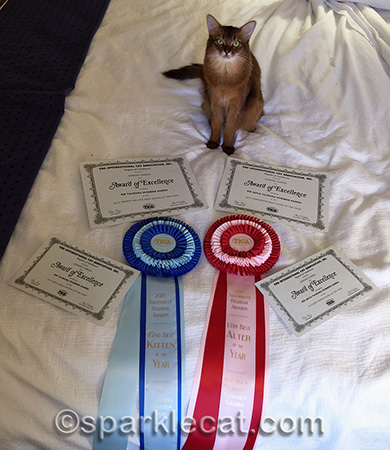 I got ribbons for being last season’s 13th Best Alter and 22nd Best Kitten in the region! Plus I got certificates for being the region’s best Somali Kitten and Alter. Even if I wind up retiring from shows, I’ve still done great! 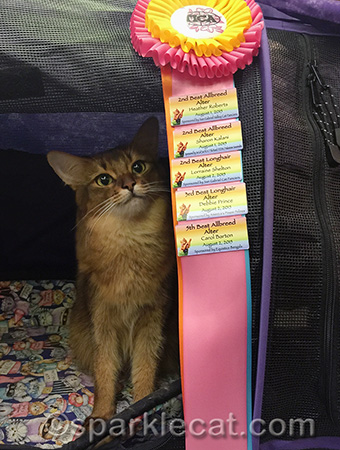 I was better the second day, although I still wasn’t at my best. Even so, I did make five finals! So it was still a good show for me. 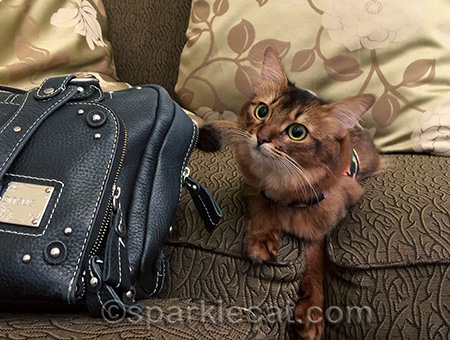 Later that night, my human took me on a walk all around the hotel. We sat for a long time on the couches near the entrance and people watched as they came in and out of the automatic sliding doors. 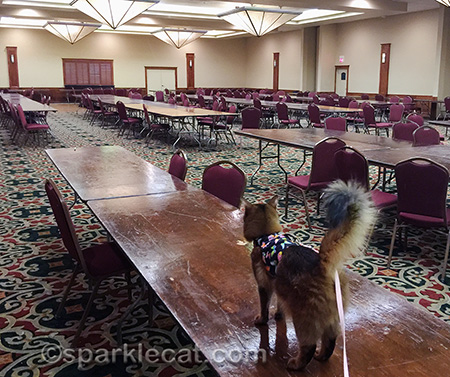 We also went to the show hall, which had been broken down. Everything was gone — the cages, the decorations, the vendors, all the cats and people. The only ones in there were me and my human. But we could still feel the energy.