Guess what? I get to keep my Enchanted Castle! My human realized that we cats liked it and felt bad about packing it up and sending it away – so she bought another one for the human who it was originally meant for. But I’m keeping an eye on mine, just in case.

It’s a good thing I have something of my own because everything else the humans brought home this month was for someone else. Like the stupid-looking cookie my human’s boyfriend showed up with.

My human let me check it out before she unwrapped it and ate it. Seriously, it does not look like a cat. 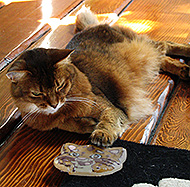 Then my human came home with a bag that smelled quite interesting. 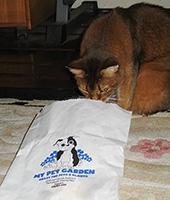 I wasn’t so sure about the contents, however. No, it wasn’t a slice of carrot cake — it was a carrot cake biscuit. 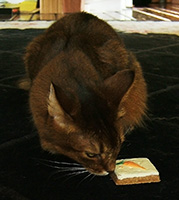 And it was for, bleagh, the dog. 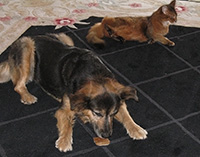 She spent far too long hanging out in the living room and sniffing it before she finally decided to eat it. I showed her my displeasure in no uncertain terms. 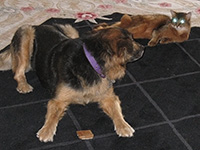 Then, my human came home with a big box that contained a new MacBook. She said it was for me, but I know she was lying. 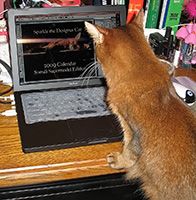 If it were really mine she wouldn’t have bought a cover for the keyboard to keep cat fur out. I let her know that this was a bogus move. 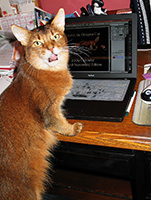 So did I get anything this month? No, unless you count the paper bag. 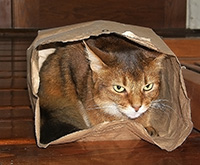 I have to admit that it’s quite fun, if rather small. Even Binga plays bag games. 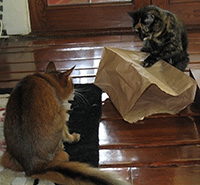 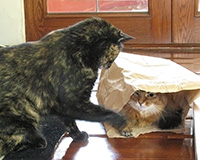 If you ever wonder how a cat signifies she is done playing with a paper bag, here’s a clue: she sits on it. 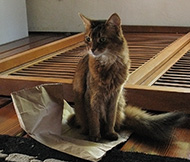 The bag was too small for Boodie to fit into, so she decided to play with the rug instead.

So August was not a stellar month. It ended with the humiliation of my human taking a photo of me while I was practicing a new Yoga pose. As you can tell from my facial expression, I have not mastered it yet. 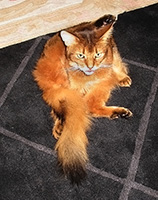