How We Cope With the Heat

This summer continues to be annoyingly hot. We cats can barely move most of the time. 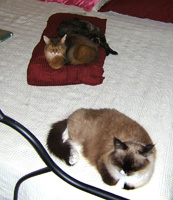 It’s all Boodie can do to flop on the dining room table.

My human got tired of finding cat hair in her food and thought maybe she should give Boodie a good brushing to get rid of some of her loose fur. She wound up filling up a whole trash container full of Boodie fur — and she barely made a dent.

Boodie, feeling refreshed from the brushing, wandered into the kitchen in search of other places to spread her fur. 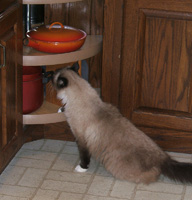 Binga took the lazy way to cause trouble. She just needed to find the right place to lie down. My human’s boyfriend’s tax paperwork was the perfect spot.

I got a little bored after a while. It has been so hot that not a lot of birds have been hanging around the bird feeder. Finally, something interesting came around and hung out by my human’s office.

I never saw such a huge bug! I begged my human to bring it in so I could play with it and then eat it, but she refused. Apparently some other lucky cat (or, worse yet, bird) got it because a few days later she found pieces of it on the pavement not far from the window. Darn!

My human’s boyfriend went off to Japan for a few days and when he returned, he brought back a gift.

My human tried to convince me that it was a cat toy. Obviously she was lying. 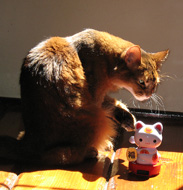 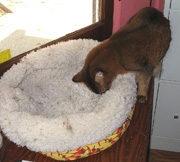 The month ended on a bad note. The office was overrun with ants because they were trying to escape the heat. They got all over my cat bed, which was looking pretty nasty anyhow, so my human decided to throw it in the wash. It looked — and smelled — even worse when she was finished cleaning it.

So I don’t like my bed anymore and I’m stuck lying around on the carpet all day, giving my human dirty looks for her poor laundry skills.