Enough workers already! My human decided to have them back to do some more stuff on the house. The really dumb thing is that it’s still all work on the outside of the house, which is pointless because we cats can’t see what’s going on. Not that we didn’t try.

This one guy — my human called him “the stucco guy” — built scaffolding up to the second floor. Binga and I tried to see what was going on but we couldn’t quite tell. 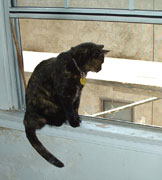 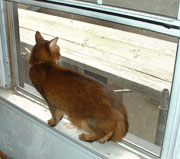 According to my human, this guy was “covering up that hideous texture coating!” I have no idea what that means. All I know is that she’s spending good money on something useless instead of getting us cats a second cat tree, which is what she should be doing. 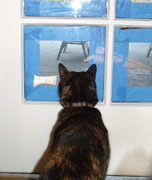 This other crew of guys were scraping and painting all the doors and windowsills and stuff like that. I didn’t think much of these workers &mdashl; they played an awful lot of Frisbee with the dog, if you ask me. And not once did any of them come in with a pole and feather to play with us! One guy petted me, I think, one time. Binga liked the workers. She enjoyed watching them from the French doors in the back.

Boodie and I checked out the view a few times too.

They certainly left a bunch of junk in the back yard for several weeks. 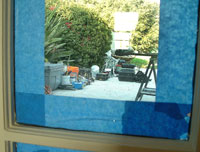 The one thing they did that impressed me was they cleaned out the upstairs balcony. 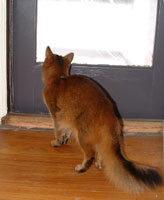 That was Boodie’s favorite part too. 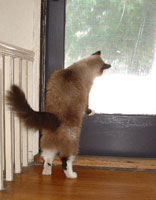 When they were done my human let us inspect their work. Neither of us ventured all that far. 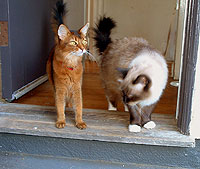 Personally, I think that balcony is a little creepy.

The other nice thing the workers did was they replaced the torn up screens on the doors in back. So now my human can open up the French doors and give us fresh air without worrying we’ll try to get out.

So it wasn’t really that bad after all. I just think it was an awful lot of work for very little benefit. 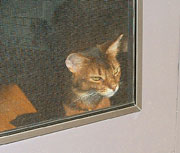