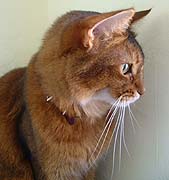 Okay, I admit that sometimes Binga can be a lot of fun. 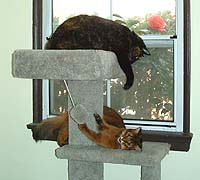 But it really gets on my nerves when she treats my stuff like it’s hers and hers alone. 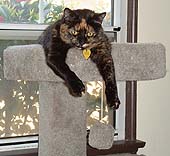 I mean, who’s the Designer Cat around here? And I’m not just any designer cat, either — my father, GC Tajhara’s Miles Davis was on the cover of Cat Fancy magazine.

My human finally ordered the May, 2001 back issue so that I could prove it. You can see the resemblance — pretty remarkable, isn’t it? 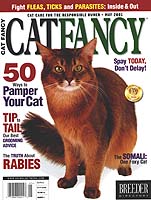 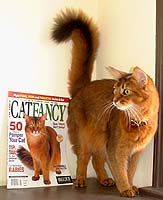 August is a really boring month around here. It’s usually too hot to even think of causing too much trouble. But then, we can get in trouble just by laying around. Like, Boodie, for example — she hangs out on the dining table all the time and it makes my human mad. She says that Boodie makes a lousy centerpiece and an even worse placemat.

My human has been trying to keep us entertained. She brought home a video for us to watch called The Secret Life of Cats.

Frankly, there was nothing secret about this video to us. We liked watching all the cats hunting down small game, though. We weren’t so thrilled with the scenes where people were talking. That part was boring. The humans here talk more than enough as it is. Humans are really noisy creatures. 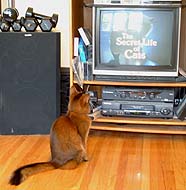 In a way, watching that video made us feel gypped because we never get to go outside. I mean as close as I get to any birds or other small creatures is the window.

Sometimes my human tries to compensate for our humdrum indoor cat lives. Her last attempt to atone, however, was a loser. She brought home what she thought were delicious new treats. They had catnip in them so she thought we would like them.

Well, they smelled interesting at first. But I tried one and it was nasty!

Even though she’s a total catnip addict, Binga wouldn’t go near them. And Boodie, who loves to eat, even turned up her nose at them.

Bad treats and a video that shows us all the cool stuff that we don’t get to enjoy — can you blame me for being disgruntled?