My human likes to roll me on my back and rub my stomach. It’s kind of annoying, but I usually let her indulge herself for a moment or two before squirming out of her grasp. After her latest trick, however, I’m not so sure I should let her do it anymore. She started poking through my hair and muttering something to the effect of, “Fleas! Ugh! You’re a designer cat and you’re never outdoorsâ€”you’re not supposed to have fleas!” It’s the dog’s fault, of courseâ€”I’m sure I got those fleas by lying on her bed.

I didn’t mind the fleas so much, although they made me itch a little. The remedy was much, much worse. My human’s boyfriend pulled out this little tube that he got from work. It was called “Advantage,” or something like that. Before I had a chance to get away, my human grabbed me and smeared this tube of stinky stuff all over the back of my neck.

It was torture! It felt yukky and smelled bad and there was no way I could get it off. Why did they put it in a place I can’t reach? I scrambled all over the house, but I couldn’t get away from that smell. Binga watched my activity with some amusement. 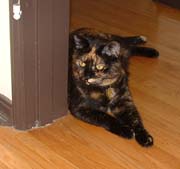 Little did she know that she was next in line to get the Advantage. Boodie got it too. And so did the dog (actually what she got had a different nameâ€”Frontline,

I think it was). I hope the dog hated it as much as I did.

August was a really dull month around here. It was really, really hot and nobody felt like doing much except sleeping. Look at this picture of Binga taking a nap. You’d never guess she’s a mean, domineering bully.

My human figured we were bored on top of being hot, so she got us a new toyâ€”another one of her two-dollar specials, of course. At least this one was pretty interestingâ€”a mouse that squeaked whenever anyone batted it.

Of course I would have preferred something a little more elaborate, but it was pretty entertaining for about 15 minutes.

Boodie liked it too. But then, Boodie likes everything.

Binga didn’t think it was so hot.

There were two reasons it was sweltering hereâ€”one was the heat wave. The other was because the house where we live has no insulation and no air conditioning. My human has been grousing about it all summer, and saying rather nasty things about the loan guy who’s been doing the refi thing (that’s how she’s getting the money for insulation and air conditioning). She applied in late May and the loan guy only finished it last week! She says next time she’ll get financing online, although I don’t know how you get money out of a computer. Anyhow, the documents finally came in for her to sign.

I gave them my stamp of approval too, by laying on them. People don’t understand about laying on documents and other important papers, but then why should they? After all, it’s a Cat Thing.