You are here: Home / Diary / Ask Sparkle: My Beginnings 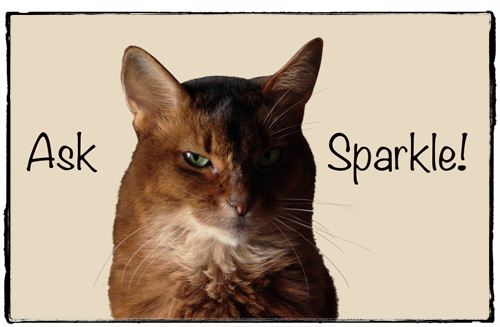 When I asked if you readers had any questions for me, it turned out you had lots! So here is the first in a series. Tillie and Georgia wanted to know who was here first, Binga and Boodie or me, while the Poupounette Gang and Cathy Keisha wanted to know how I came to live here. Those questions are kind of wrapped together so I will deal with them all at the same time.

So… yes to the Chans, I came to live with my human as a kitten, and nope to Cathy Keisha, I was not a rescue. I came from a very small, but excellent Somali breeder from Temecula, California. My human usually doesn’t get breed cats, either as rescues or from breeders (Binga and Boodie are testament to that!), but after the cat before me died, she really wanted a cat who would be hers and hers alone. Binga (who came from a kill shelter) loves all humans equally, even if she hasn’t met them yet, and Boodie likes cats more than humans. So she decided if she found a cat breed with a trait that included bonding with one human, that’s what she would get. She always loved Abyssinians, but when she found out about Somalis — a longer-haired version of an Aby — and read that they generally bonded with one human, she was hooked. Unfortunately, it did not work out the way she thought, because she says I am bonded with her like a 13-year-old is with her mother — shunning her one moment and needy the next! Well, that’s what she gets.

It was months before the breeder had kittens available. My human and her boyfriend came down to visit with us — I had two sisters and a brother. One sister was crazy, the other one was quiet, and my brother bit my human’s boyfriend. I was in between and did not bite anyone, so a couple of weeks later, they came down to Temecula again and got me. I was not happy about this! In fact, I screamed the whole two hours back to Los Angeles. Here I am in the car while the humans were filling up the gas tank, and you can see I am complaining. 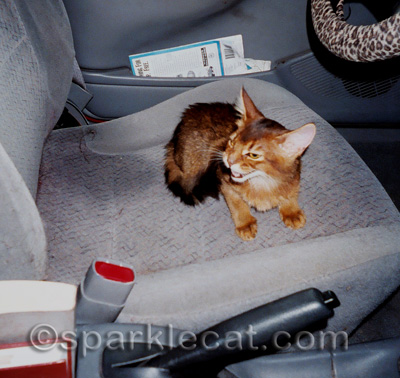 And it got even worse when I got to my new “home” — I had these waiting for me, ominously: 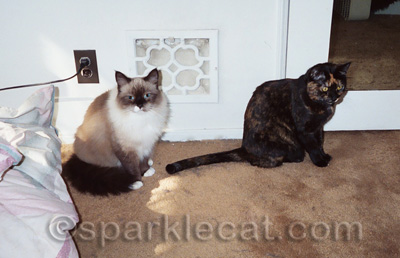 That’s right — Binga and Boodie were here before me. In fact, Binga knew the cat before me. They were not pals either. 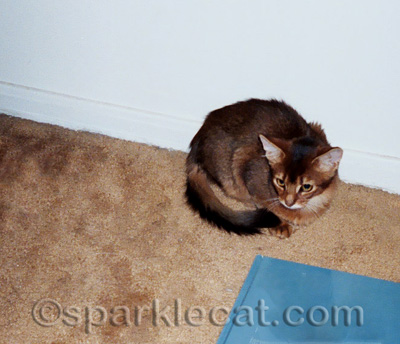 I was quite intimidated by both of them at first! 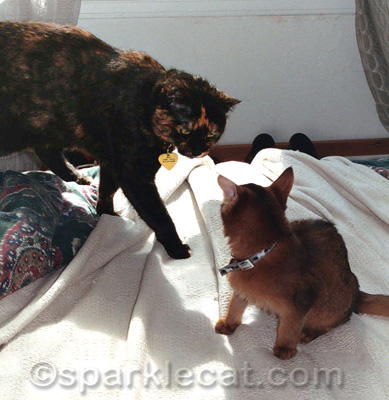 Binga especially seemed to have it out for me. But I spent most of my time in my human’s home office… which is how I learned it was actually my office! 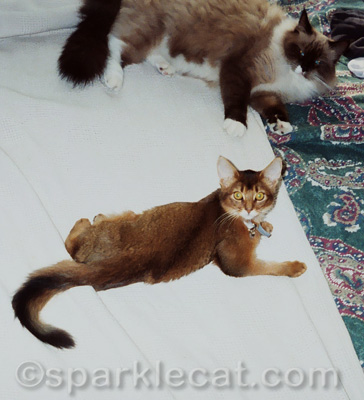 Boodie was pretty easy to win over, since she is more of a cat’s cat. 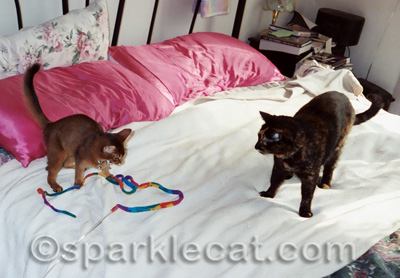 Binga was more difficult, but some playtime helped. 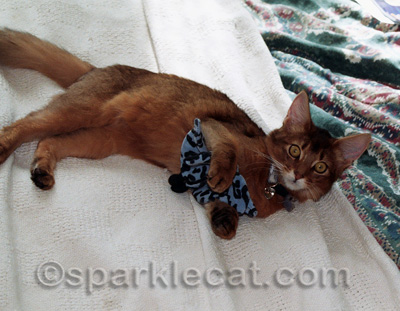 But it was not long before I took over!