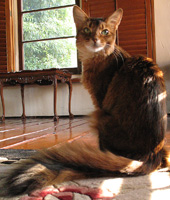 A few days after the new rug arrived, I was quite shocked when my human gathered up the wrapping it came in — my new bed! — and tossed it. She is so thoughtless.

You can see why I liked the wrapping so much better than the actual rug — the rug is a fur magnet. 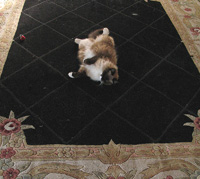 My human has vacuumed the thing several times — something she hates doing — and as soon as she’s done, Boodie, our biggest manufacturer of loose fur, comes along and messes it up again. 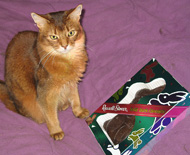 Every year around this time, there’s this weird holiday called Easter. The humans don’t exactly celebrate it, but they usually give each other a few things. My human’s boyfriend always brings home a bouquet of flowers, but this year he also found a dark chocolate bunny. My human liked it, but I was not impressed. After all, cats are not allowed to eat chocolate.

My human wanted to include us in this holiday thing, so she bought us a bunch of toys. At least she thinks they are toys. I think they are junk. 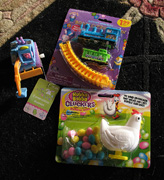 She was all excited about the train. It held my interest for about a second. 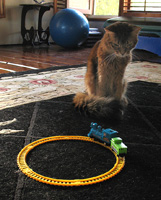 I don’t think Boodie liked it at all because it disturbed her nap.

The “Construction Bunny” was a total waste of time.

So was the bunny toy in the egg. I was not compelled to play with it. 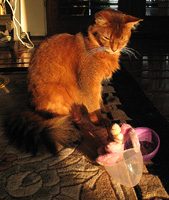 Most horrifying of all was the windup hen that laid bubblegum eggs. I mean, look at the thing — it’s enough to give anyone nightmares.

To add insult to injury, my human also brought home a “Hello Kitty” marshmallow pop, claiming it was for me. Of course it was not — she ate it. 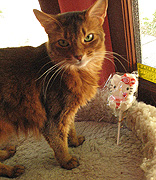 Just when I was beginning to think that Easter was a total wash, my human did present me with a cool tin box of cat treats! 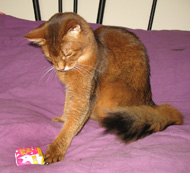 Actually, I thought it was just regular, dried cat food. I was very disappointed I was told I was only allowed to eat one or two treats at a time. 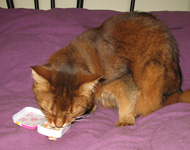 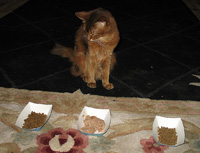 We are having food issues around here as it is, all because of the pet food recall. Well, actually the other two cats don’t have any issues at all. They are hogs and will eat anything put in front of them. I am more discerning. Never mind that my human refers to it as “picky.” 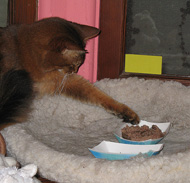 The humans know when I don’t really like the latest brand of food all that much because instead of eating it, I’ll just touch it. My human’s boyfriend refers to it as “playing with my food.” He’s not quite correct about that — if I were playing with it, I’d be flinging it across the room and chasing after it.

Here is a small sampling of all the different foods I rejected.

My human finally gave up for a while and just gave me our dried food for both breakfast and dinner. Eventually I got bored of that. So one day she came home with a big bag of free samples of dry cat food.

She presented them to me for my approval. I didn’t like any of them. 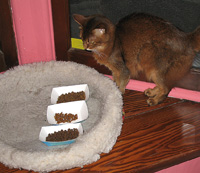 Seriously, is it all that hard to make good-tasting food that isn’t poisonous?