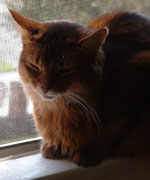 Just when I was getting fed up with these stupid eBay auctions, my human did something cool. It was a total surprise, too. One day, this box just appeared on the doorstep. 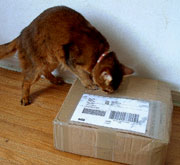 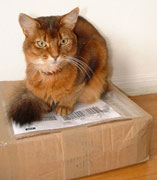 My human said what was inside was even better than using the box as a handy perch. I thought this was just her excuse to get me off of it, but sure enough, there was something intriguing inside. 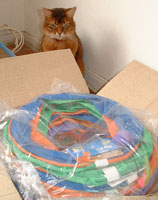 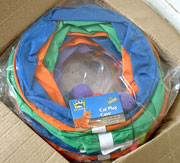 It was a whole bunch of brand new cat tunnels! My human said I could only have one, but let me pick it out. 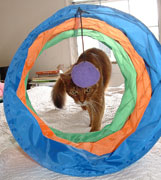 Binga wasn’t allowed to play with it because she tried to bite off the pom-pom ball.

My human said she was going to sell the other cat tunnels on eBay. So far she’s only sold one. I hope she sells more. I’d rather pose with cat toys than with bears. 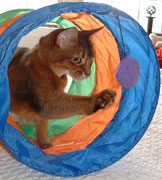 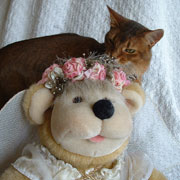 I wish the rest of the month was that fun, but it wasn’t. Some workers came in and messed around, painting the upstairs and sanding down the balance beam. 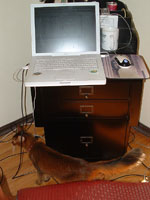 We all had to stay downstairs, even my human who had to work on a little desk in the dining room.

I was not impressed with all these goings-on.

After the upstairs was painted, my human’s boyfriend brought her some Easter flowers — no poisonous lilies this time! 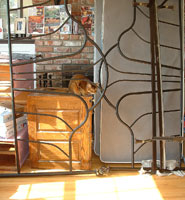 I was glad all the painting was over. But little did I know, the worst was yet to come! My human kept talking about some guys coming by to “do the hardwood floors.” Actually she’s been talking about this ever since I came to live here, but I guess she meant business this time, because these guys came over and took all the furniture downstairs, even the bed frame.

Binga thought that was fun — she climbed onto the side of the mattress, which was propped up against the living room wall. 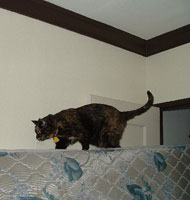 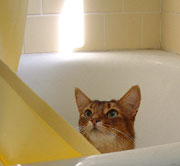 I did not think it was fun at all! Binga and Boodie got locked in the kitchen and dining room. I kept trying to escape, so my human put me in the downstairs bathroom where, she said, she could “keep a better eye on me.” So I spent most the time in there by myself while all this horrible noise came pounding and grinding from upstairs! It was one of the most frightening experiences of my life! I spent a lot of time hiding in the bathtub.

Fortunately these guys didn’t stick around making noise for all that long. They left early in the day and we cats were allowed into the living room for the rest of the day, even though we still couldn’t go upstairs. I took a nap in the sun on the dusty floor

Because we don’t even have a couch right now, my human had to sleep on the floor for two nights. She complained loudly about this. I don’t know why — I do it all the time and I don’t see a problem with it.

Finally the floors were done and my human let us come upstairs to check it all out. 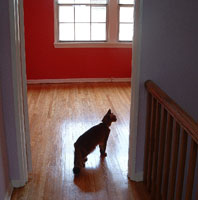 We weren’t really that impressed. Floors — what’s the big deal? 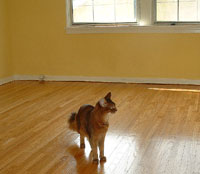 The really important thing about all this was that because all the furniture was being moved around, we found a lot of old cat toys — even toys from a couple of Christmases ago. They smelled a little funny after sitting underneath things for so long, but other than that it was almost like having new toys all over again. 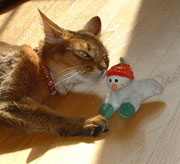