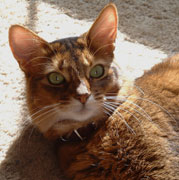 Like many months, April started with the changing of the grass.

My human has yet to solve the mystery of the open cabinet door. I absolutely swear that it opens all by itself and I have nothing to do with it. But of course once it’s open I have to go look. After all, it’s full of the dog’s food and treats and while I don’t like the dog, her food smells really good. 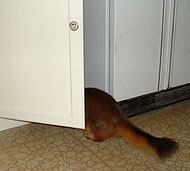 Because it rained so much at the beginning of the year, all the bugs appeared early. Usually we don’t get this many until summer, but lately they’ve been all over the place. What fun!

For some reason my human refuses to join me in my bug adventures. In fact she seems rather disgusted by it all, especially when I catch them and eat them. But no matter — it just means more bugs for me!

Boodie likes the bugs too but more often she likes fooling around with inanimate objects and pretending they’re prey. She does this with the cat toys at least once a day — she’ll carry some fuzzy ball or catnip mouse in her mouth and meow like she’s got something special. Sometimes it’s not even a cat toy. The other day she was carrying around a plastic bag of something my human called “hardware.”

Boodie was really proud of catching the hardware. My human thought that this was one of the stupidest things she’s seen her do. I agree  — with all those bugs around the house, why mess around with a bag of junk?

Although my human and I are in agreement about Boodie’s stupidity, I am very mad at her this month! As you know, the Pet Expo always happens in April, and she is supposed to go there and bring home all sorts of new treats and cat toys. Well, guess what?! This year she didn’t go! She said something about having a date with some guy named Mark Victor Hansen instead. (I wonder if her boyfriend knows anything about this?) For three days she was gone from really early in the morning til late at night. But apparently she felt bad about skipping the Pet Expo and having her boyfriend feed us dinner every evening, because she brought us home a “present.” Some present: 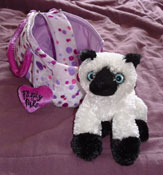 Like a real cat would ever be caught dead in a pet carrier! My human has brought home dumb plush toys in the past, but this one really blows. This didn’t stop Boodie and Binga from checking it out.

I only examined it with the greatest reluctance. And boredom. 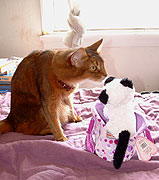 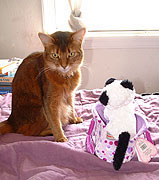 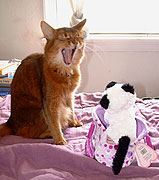 In any case, my human has a chance to redeem herself because there is another Pet Expo in June in Pomona. And I don’t want to hear any lame excuses from her about “events” or “deadlines” or whatever. After what she put me through posing with this dumb toy, she’d better straighten up!