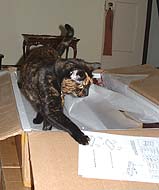 This has been such a busy month. It started when some delivery guy dropped off two huge boxes. When the humans opened them, all we saw were planks of wood and some instructions. Binga had to check out the instructions even though she can’t read.

My human’s boyfriend put the wood together and it turned out these things were bookcases. Binga enjoyed sitting inside the smaller one, but my human thought she would make a lousy bookend. 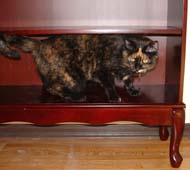 I preferred using it as a perch so I could watch the birds.

That was only the beginning. Then one of the worker guys came by and filled in some gouges to the upstairs ceiling that the electrician guy made when he put in that hideous fan. The steps were completely covered with a sheet for a couple of days.

Then my human’s boyfriend brought home a couple of bass guitars. He was doing something to them for this guy — I don’t know what. Frankly, I didn’t care what he had to do; I just wanted to check out the cases they came in.

Binga really made herself at home in one. I hope the owner of the basses isn’t allergic to cats.

But the most exciting thing that happened was that my human and her boyfriend made their annual trip to the Pet Expo. This time they didn’t bring home any food samples (well, the dog got a couple, but she doesn’t count) — there were toys, however. As usual, my human made a couple of dorky choices. I think the stupidest one was this little plastic penguin. How many seconds do you think that thing lasted until it slid under a piece of furniture, never to be seen again?

And she brought home a dollar bag of catnip just like .

Binga and Boodie think the catnip bag rules. I just don’t get it. Catnip has little appeal for me. 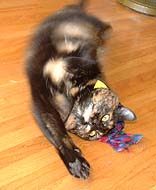 But for once my human got something really cool — a DVD made especially for cats.

Boodie and I thought it was fascinating! Kind of frustrating too — I mean, how do you get to those creatures through the glass? 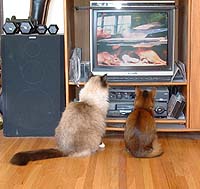 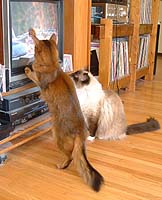 Binga didn’t like the DVD. She thought we were nuts.

So I was enjoying myself and minding my own business when my human informs me that she got something special “just for me.” When she says things like that, it makes me nervous. She showed it to me and I didn’t like the looks of it.

Sure enough, she made me wear it. How humiliating!

Even worse, she made me walk the balance beam with it on. I felt like a clown.

Much to my relief she took it off eventually. But wearing it stressed me out so much that I decided that maybe I’d sneak a little whiff of that catnip bag… when no one was looking, of course.