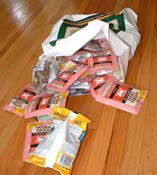 My human and her boyfriend went to something called a “Pet Expo.” I’ve never been to one, but I’ve heard stories about all the glorious things they have thereâ€”giant, elaborate cat trees, fancy, state-of-the-art cat toys, hundreds of different kinds of cat food and dozens of different brands of kitty litter. There are also people from loads of different pet rescue organizations, like the Irvine Animal Care Center, and cats up for adoption. Sounds like a cat paradise. So I was expecting my human to come home with something really great. All us cats gathered around as we were presented with a bag full of goodies! 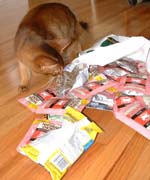 There was lots of that great Nutro kitten food (apparently my human found some great deal on the packets), and loads of samples of free dry foodâ€”all of it the healthy stuff (my human’s really picky about cat food, even when it’s free). We knew there had to be more stuff in that bagâ€”I mean, where were the toys?

Finally we found one.

I was stunnedâ€”my human was surrounded by the best cat toys available and all she came back with was a one-dollar, catnip-filled bag of cloth? What’s wrong with her? I figured it was probably too much to hope for one of those giant cat trees, but this is ridiculous! I know we’ve got several dozen toys here already, but still.

Boodie didn’t careshe actually commandeered the thing. Binga usually does that, but once Boodie got her paws on that bag, she wouldn’t let go. She also drooled over it and when she finally put it down it was disgusting! Binga even tried to bury it. 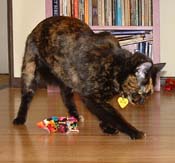 Oh wellâ€”at least we got new dry food for a few days. We enjoyed all the flavors. My human also found out about this new brand of cat litter at the Pet Expo. It’s called “The World’s Best Cat Litter“

and later on in the week, she bought some at the pet store. We all liked it. One of us liked it a little too much and tore the bag apart. I’m not telling who did it (it wasn’t me!). 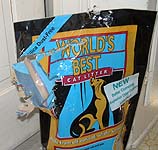 Since my human didn’t bring home any worthwhile toys from the Pet Expo, I decided to make the best of things and play with this new stuffed frog her boyfriend gave her. I don’t understand this fixation with frog toys. I’ve come to the conclusion that they all make lousy playthings, too. I like the tags on this one better than the frog itself. 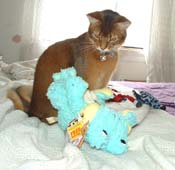 Just when life threatened to get really boring (which, of course, would have necessitated my getting into some form of trouble), this guy started coming around and banging on the balcony. He’s taking the whole thing apart, actually! My human seems to think this is a good plan. I’m keeping an eye on him, though, to make sure he doesn’t screw up. He thinks this means I like him. Little does he know.