You are here: Home / Diary / A Very Nice Day Visiting the Hospital 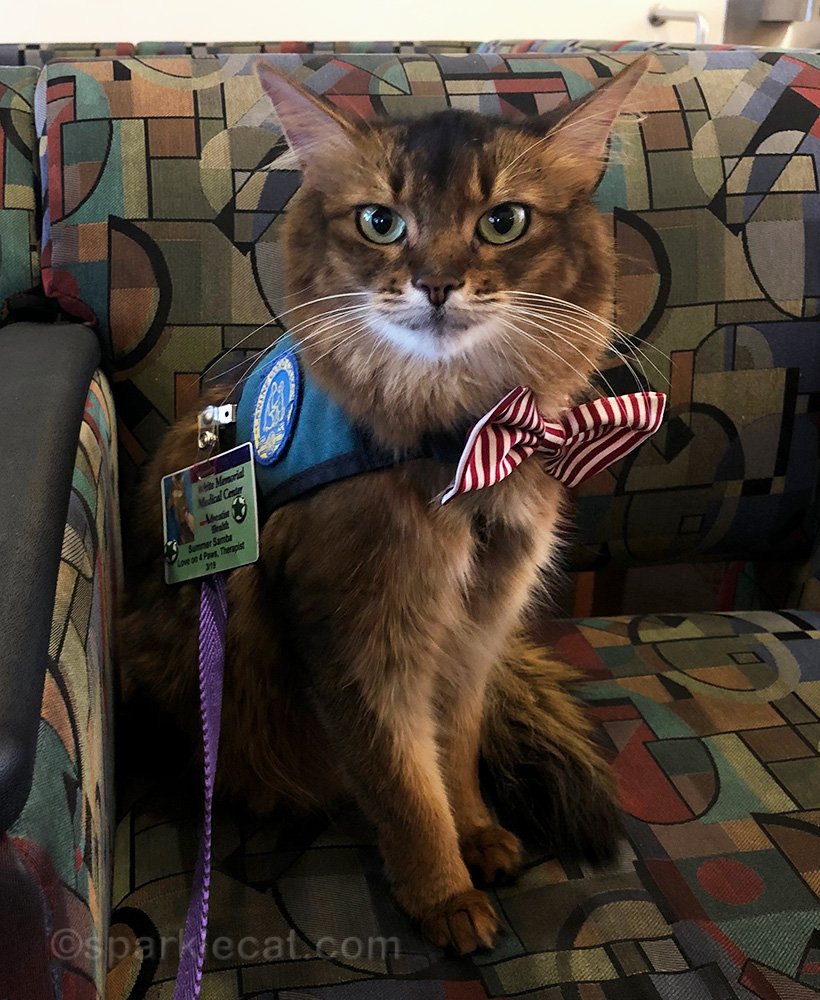 I had a busy and fun therapy cat visit this week! My first stop was the pediatric section, as it usually is for this particular hospital, and many of the rooms were occupied. Only a few of them were Isolation, so I had lots of visits. In fact, the first room my human and I knocked on, the girl immediately sat up when she saw me. She was so happy to have me snuggle on the bed with her. She asked lots of questions about me — what kind of cat I was, how old I was, and such. My human was happy to answer them all.

Although we spent lots of time with this girl, we were still able to see lots of other kids too. We saw another girl who wasn’t in bed, but who still wanted to see me. Also a young boy who enjoyed me, even though he was also pretty engrossed in a movie on the TV. The last girl we saw completely lit up when she saw me (not unlike the first girl!). So of course I laid down and curled up with her. Sometimes, like the first girl, my human talks a lot with the patient. Other times, like with this girl, she doesn’t say anything, and just lets me do my work. There just wasn’t anything that needed to be said, other than, “Would you like a photo with the kitty?” (She did.)

We also had a cool coincidence in the pediatrics ward. There was one woman with a baby. We usually don’t visit much with hospitalized babies, since they are too young to understand what I am, and they are often too sick to care anyway. But my human always asks in case the parents want to have a moment with me. And this mother remembered me from the other hospital I used to visit that is closed down now!

After pediatrics, we had just enough time to visit the Rainbow Room. That’s the waiting room for the outpatient children with developmental disabilities. I haven’t been there sine sometime last year because we’ve been visiting on other days. So my human made a special effort to stop by — and we were missed! I spent time with several nice kids. My human is always careful with me at the Rainbow Room, because the kids are young enough not to know how to be gentle with me. Plus, since some of them have minor disabilities, that can also complicate things. But all the kids were nice today. My human kept an eye on the one little boy who might have been rough, and kept her hands on me the whole time. She had a nice conversation with the grandfather of one of the kids too (who probably wasn’t much older than her).

I had a very nice therapy cat day! 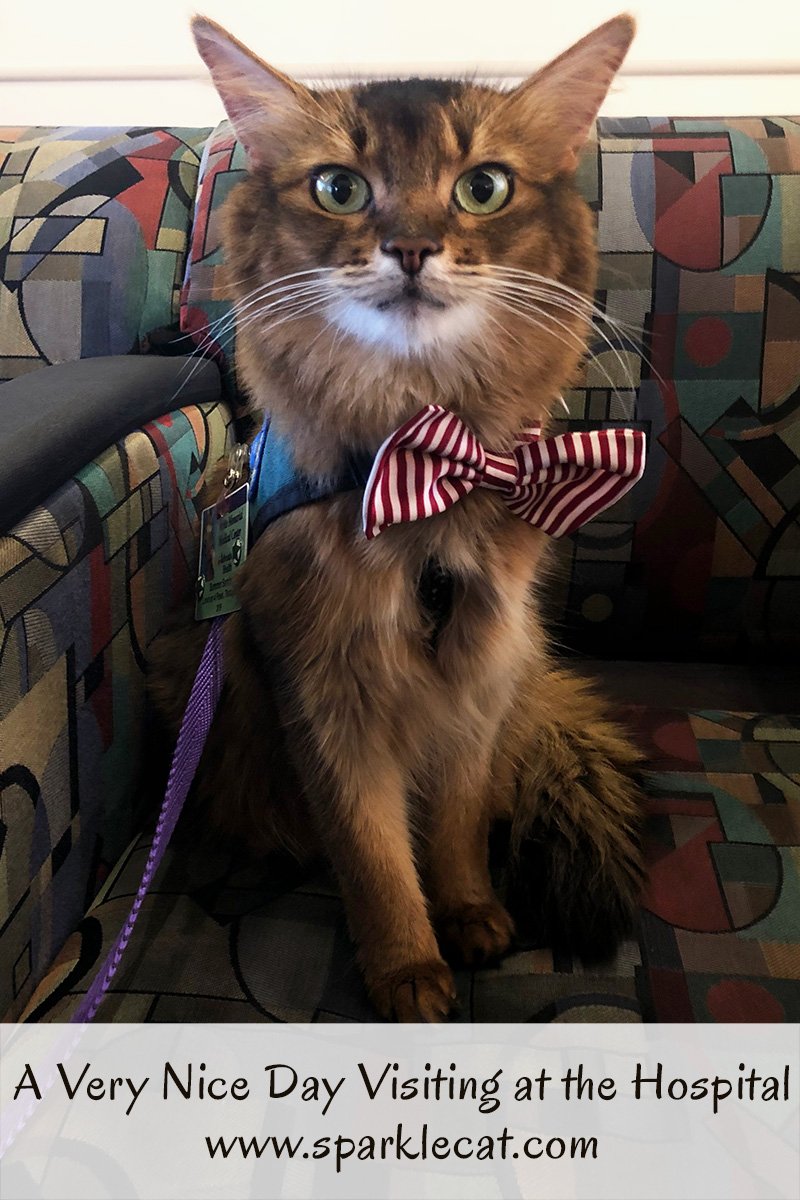 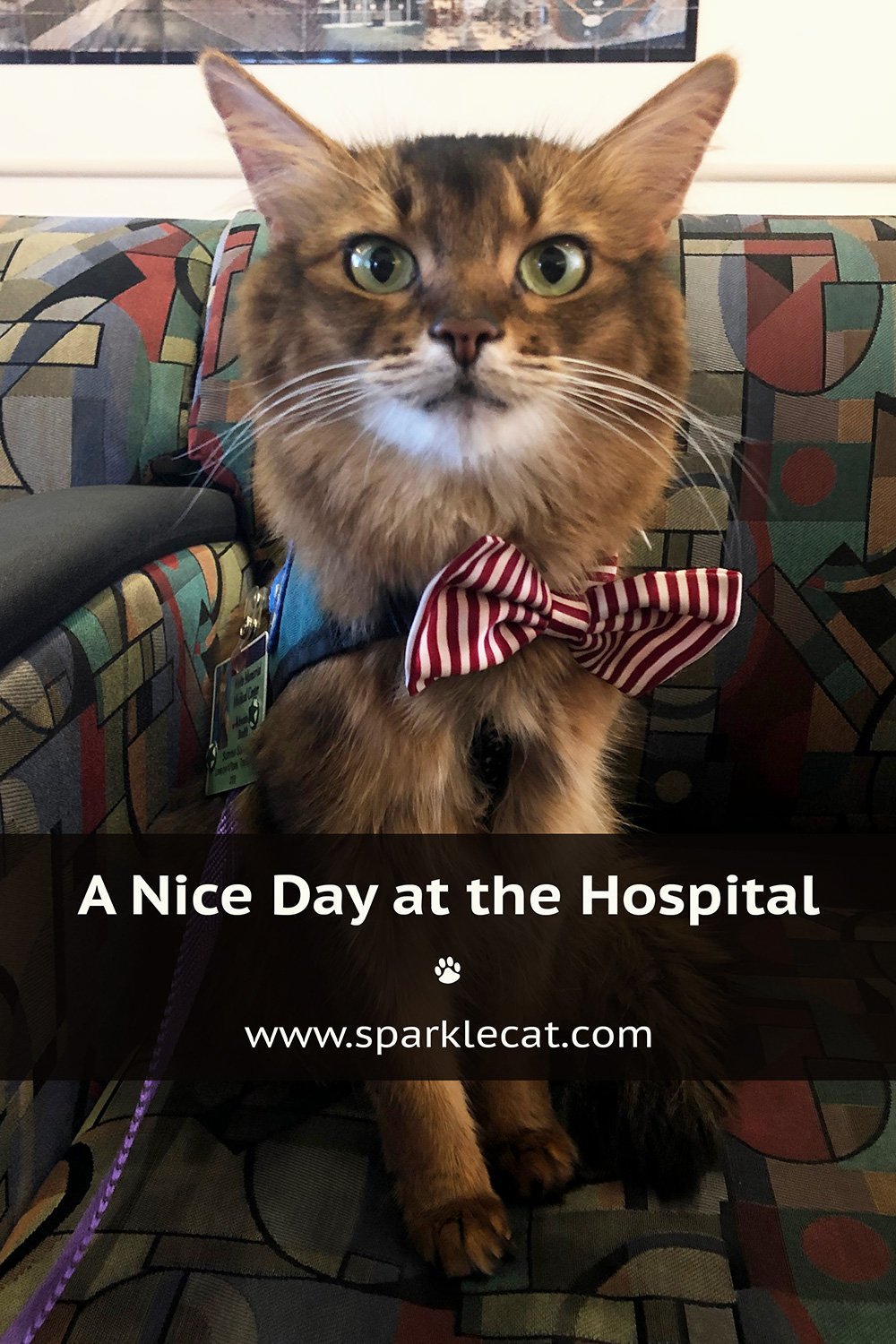