You are here: Home / Diary / A Busy Therapy Cat Day at the Hospital 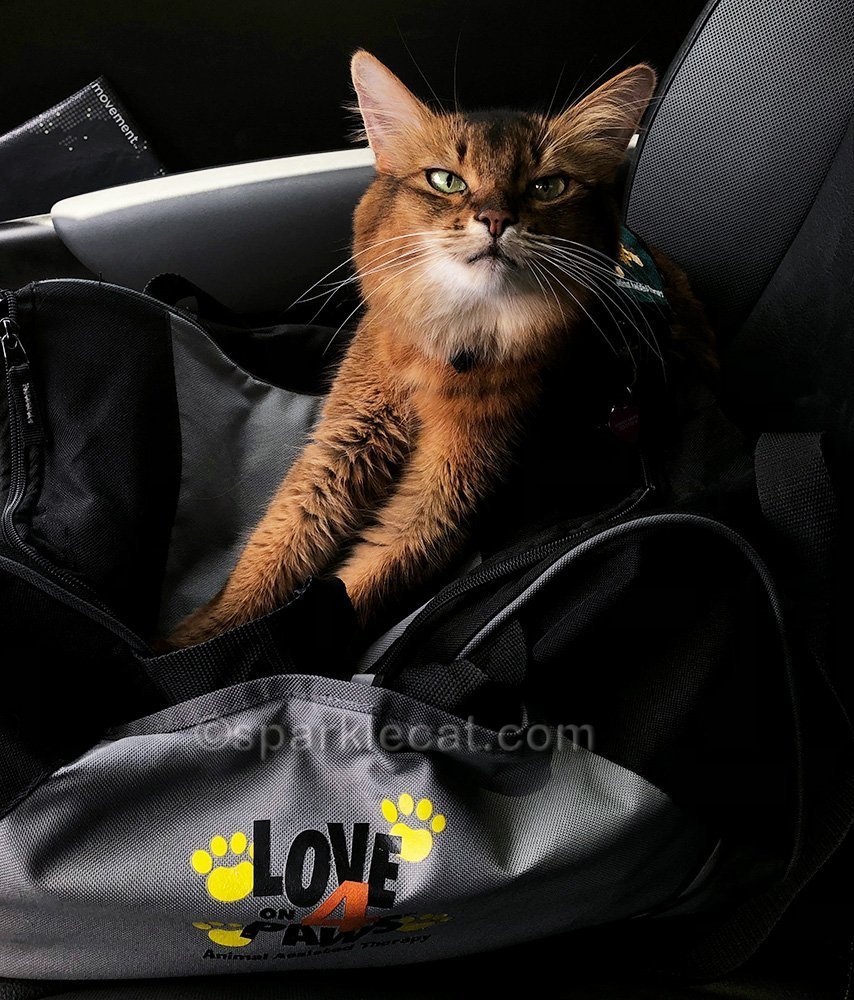 I got to visit one of my regular hospitals this weekend. In fact, it was the first hospital I visited almost exactly three years ago after I got my therapy cat certification. You never know what to expect when you get there. It’s different every time. This Sunday, there were lots of patients, so I had a very busy therapy cat day! I’ll tell you the highlights.

Before we could even start our first visit, the doctor walked in and needed to talk to the patient. So my human promised her that we’d return later. The next woman we saw was in bed, and her daughter was there. While I snuggled with the patient, she chattered away in Spanish, and her daughter translated for her. They were both really big animal lovers. I visited a couple of really nice men, and also with the nurses. The nurses always make a big deal over me, and I enjoy that! One man patient was sitting up, and his wife said he was allergic to pet hair — but she really wanted to see me. So I spent time with her, and she brought us in so her husband could at least look at me, because she thought I was so cute and novel.

After we finished with the other patients in the section, we returned to the first woman, and spent lots of time with her. She loved me a lot, so I wanted to make sure she had quality time with me. My human does her best to remember to return when she tells someone we will, and it was obvious this patient really, really wanted to see me.

The second section was a little quieter but we still had patients to visit. One lady was sitting in a chair and while she petted me, she chatted for a long time. Usually patients don’t talk about what is going on with them, but she did. She wanted to go home really badly, but she said the doctors had found something. She was a very sweet lady, and a doctor walked in just as we were wrapping up our visit. As we left, we heard him tell her he was an oncologist, and it is a good thing our backs were turned to the woman, because my human’s face just fell. It was a very sad moment.

The last woman we visited spoke only Spanish, and there was no one to translate for her. That didn’t matter because I just snuggled with her and purred for as long as she wanted. And really, that’s the important part anyway.