You are here: Home / Diary / 10 Ways in Which Cats Are More Awesome Than Humans 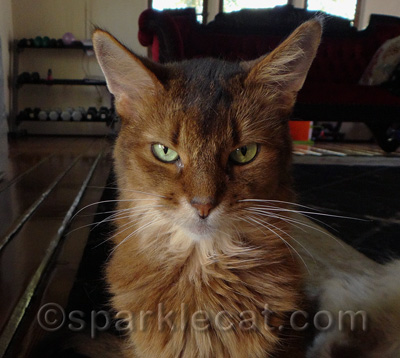 Just because they have thumbs, humans think they have the upper hand on us kitties. And while we often let them get away with this misguided belief, nothing could be farther from the truth. We all know who is really in charge in our homes; after all, we don’t have to change our own litter boxes, do we? We don’t have to go out and get our own food, toys and cat trees, right? Not only have we kitties got our humans catering to all our needs, we are way awesomer than humans could ever hope to be! The reasons why are infinite, but just for fun, I thought I would list ten things that we cats can do that humans will never be able to!

1. We can touch our noses with our tongues. I don’t think even Gene Simmons can do that.

2. We can move our ears independently of one another.

3. In fact, we communicate with each other with our independently moving ears. No verbal language necessary — kitties from different countries will instantly understand one another.

4. Humans need to mark territory by drawing up complicated, hard-to-understand contracts. We cats just spray on it, and it is ours.

5. We cats can jump five times as high as we are tall, which is way more than even so-called high jumping humans can do.

6. Humans who hunt their own food need things like guns or fishing poles. We kitties can dispatch our food without any of these props. And we don’t need to cook our catch either.

8. Humans have a love-hate relationship with carbs. We kitties couldn’t care less about them.

9. We have a magical sensory and radar system that keeps us in constant touch with the world around us. You might know this system as “whiskers.”

10. We can purr! And science has yet to recreate this fabulous ability in a human.